Keselowski: "I'm Going To Make It Here, Whether People Want Me To Or Not." 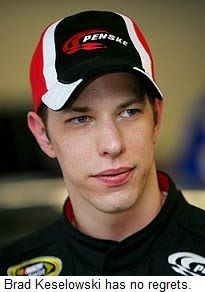 Brad Keselowski said he does not regret his recent on-track skirmishes with Carl Edwards and Kyle Busch, and feels his aggressive driving style has allowed him to make his mark in the highly competitive world of NASCAR.

Commenting on his skirmish with Busch on the final lap of Friday night's NASCAR Nationwide Series race at Bristol Motor Speedway, Keselowski told Sirius NASCAR Radio's Sirius Speedway with Dave Moody, "I dont think I could have avoided it, but I could be wrong. Kyle got a great run underneath me in Turns One and Two, and actually had me cleared by one or two inches. But he wasn't sure he was clear, so he stayed in the bottom lane. When he realized he was clear by that inch or two, he came up, but with such an abrupt manuever that he lost distance to me (causing contact). It was such an abrupt manuever that I don't feel like there was anything I could have done. But that's up for debate."

After taking the lead on the final lap, Keselowski said he "absolutely" expected retaliation from Busch, saying, "Kyle Busch never does anything that's his own fault."

"I was talking about it backstage with Juan Pablo Montoya and Martin Truex, and it just came out," he said. "It was all in good fun. I had fun with it, and I think at least 150,000 fans had fun with it, too."

The Nationwide Series point leader admitted that he, Edwards and Busch have a great deal to lose by allowing their personal animosity to impact their respective championship chases. "There's a lot at stake for all of us," he said. "I've got some thoughts on how I'm going to proceed moving forward, but I'm not necessarily going to share them right now.

"To be honest, there's a level of pride that the run-ins I'm having are with some of the best drivers in the sport," said Keselowski. "Kyle and Carl are two of the best drivers in NASCAR, and they're angry with me because I'm running up there with them and pushing and shoving them back. I don't think it's anything to be ashamed of, but by the same token, it's something that I have to be very smart with." 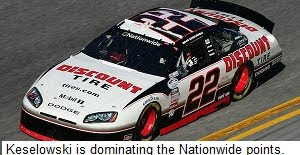 Keselowski said he is not interested in altering the hard-charging style that carried him to the top levels of NASCAR and made him a consensus pick for the 2010 Nationwide championship. "It's something that I've put a lot of thought into," he said. "I have definitely blazed a path that has gotten me attention; both positve and negative."

Keselowski said he paid special attention to the recent comments of former crewchief Ray Evernham, who helped guide Jeff Gordon through a spate of on-track incidents with the late Dale Earnhardt early in his career.

"I thought about (Ray's comments) for quite a while," said Keselowski. "His theory was that if you fight with a guy like Big E, it's going to end badly whether you win or lose. Ray made some great points... but I don't really think it applies to where I'm at.

"Look at the sport right now," he explained. "There are things you have to look at before you can comment on me, or the things I've done. Look where I'm at, how I got here and who else is making it in this sport. In the last three or four years, only two drivers have made it to the Sprint Cup level; me and Joey Logano. Does the path that Jeff Gordon, Denny Hamlin and Carl Edwards took to the top of this sport still apply? Does it still work today? The answer is `no.' It doesn't work today.

Keselowski said he realized early in his career that the only way to make it as a Sprint Cup driver was to "dig in, put my foot in the ground and say `I'm going to make it here whether other people want me to or not.' That's why I made it to the Sprint Cup level when other drivers with similar talent have not. 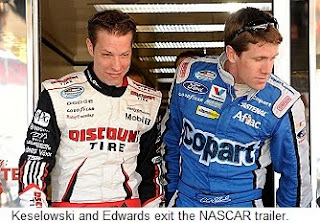 "It's easy to say, `The way Brad has done it is wrong,'" said the Michigan native. "But the sport has changed radically in the last three or four years. What Jimmie Johnson, Denny Hamlin and Jeff Gordon did to get themselves in the door won't get you in now."

The second-generation driver said that even with a 313-point lead in the Nationwide standings and a solid Sprint Cup ride with Penske Racing, he still worries that his NASCAR career could slip away. "On the Nationwide side, I guess I'm established," he said. "But in Sprint Cup, by no means (am I secure). I've only won one race, and I've got a lot more work to do before I become an established driver on the Cup side."
Posted by Dave Moody at 8:55 PM