Paul Menard made it official today, confirming that he will leave Richard Petty Motorsports at season’s end to drive for Richard Childress Racing in 2011. 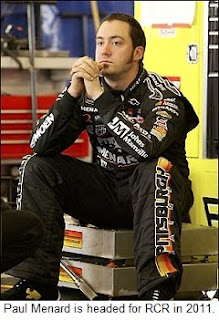 The move will bring RCR back to the NASCAR-mandated maximum of four NASCAR Sprint Cup Series Chevrolets, after sclaing back to three cars this season due to lack of sponsorship. Menard called the decision “a no-brainer," and said he is looking forward to joining teammates Kevin Harvick, Jeff Burton and Clint Bowyer; all of whom are either qualified for or battling for a spot in the 2010 Chase. He is currently 23rd in championship points, with 51 top-10 finishes in 152 career Sprint Cup starts.

His decision is a blow for Richard Petty Motorsports, which is already set to lose lead driver Kasey Kahne at the end of this season. Elliott Sadler’s status remains uncertain, while AJ Allmendinger recently signed a contract extension that will keep him with the team through the 2012 campaign. RPM is believed to be close to a deal to put Marcos Ambrose in the #9 Fords next year.
Posted by Dave Moody at 1:02 PM