David Starr’s #81 Randy Moss Motorsports Toyota will be sidelined for at least the next two races, as the team attempts to regroup. 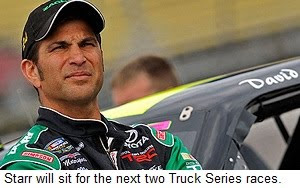 Speaking on the condition of anonymity, a team source told Sirius NASCAR Radio's Sirius Speedway with Dave Moody that Starr will not compete in the next two events at Chicagoland and Kentucky Speedways, with a possible return at New Hampshire Motor Speedway on September 18.

The team has suffered a number of crashed trucks in recent weeks -- most recently in a 23rd place finish at Bristol Motor Speedway -– and with Starr’s Zachry sponsorship covering only part of the season, the team has fallen behind financially and in terms of equipment. Some members of the #81 team were laid off this week, but others have been retained in hopes of returning to competition later this season.

Mike Skinner's #5 Toyota remains fully funded, and will not be effected by the decision.
Posted by Dave Moody at 12:34 PM