McDowell In, Yeley Out Of Whitney Motorsports #46 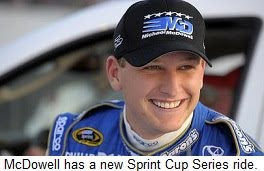 McDowell has been driving for Prism Motorsports, qualifying the team's #55 Toyota for 17 of 24 races in primarily been a start-and-park effort. He currently ranks 45th in championship points, and told Sirius NASCAR Radio's Sirius Speedway with Dave Moody that the opportunity to run complete races for Whitney Motorsports was a major factor in his decision to change teams.

"That’s the main factor for me," he said. "Prism Motorsports was great and I appreciate everything they’ve done for me this year. But Dusty’s program will allow us to run full races, and that’s huge. We’ll run four or five full races the remainder of this season –- most likely Atlanta, Phoenix, Texas, Talladega and Homestead -- and we’re committed to run 15 full races next year. We’ll almost certainly run the first five races in 2011, then keep going as long as the sponsorship holds out, starting and parking when we’re not fully funded.

"I'm happy to join up with Dusty and Whitney Motorsports again," he said. "We worked together in the Nationwide Series last season and got along really well, so when he called and asked if I would be interested in driving his Cup car I jumped at it. He has a good group of guys and I can't wait to get to the track and work with Tony Furr. It's always good to be able to work with someone who has as much experience and has had the success Tony has."

"We've got a Richard Childress Racing Chevrolet in the shop right now, and the deal is made to have ECR power under the hood. Horsepower has been an issue for the team this year, and they've moving to fill that void."

Yeley expressed unhappiness with the way the change was implemented, writing via Twitter, "I was happy with the 46 car and the crew guys were awesome. Everyone involved was great, just not happy with the way things have been handled. I know I have missed some races, but Whitney knew we were way short on power. Went and got my stuff today from the shop. Never heard from the owner at all."
Posted by Dave Moody at 1:53 PM