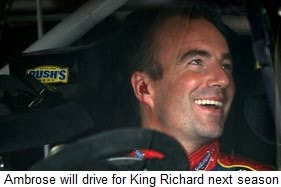 Richard Petty Motorsports confirmed today what Sirius Speedway first reported on July 27, that Marcos Ambrose will drive the team's #9 Fords beginning in 2011, with sponsorship from Stanley Tools. Ambrose replaces Kasey Kahne, who will drive for Red Bull Racing next season before moving to Hendrick Motorsports in 2012.

The former Australian V8 Supercar champion announced last month that he would not return to JTG Daugherty Racing next season, and said his decision to join RPM will "eliminate any question marks I’ve got about stuff around me and people around me. Hopefully, we will jell together well. All you can ask is to put yourself in these opportunities. If I can get in Victory Lane... there will be no question marks left. It’s very, very simple.

"I never thought for one moment that I would ever have a friendship with The King or drive for him," said Ambrose. "It's a dream opportunity for me to solidify myself in NASCAR as a premier driver."

He said RPM offers an opportunity to succeed on all kinds of race tracks; something he lacks in his current ride. "We haven’t been fast enough (or) consistent enough on the intermediate ovals," he said. "That’s a primary reason why I thought I needed to make a change. I believe I’m as good as anybody out there and can win four championships just like Jimmie Johnson has done. Until you get to the point that you can prove or disprove what you’ve got, it’s very hard to be sure. We’ll find out in 2011.”

Ambrose said his is the latest in a series of announcements to come from the Petty camp in coming weeks. "I feel very secure in RPM and where they’re heading and the direction they’re taking. I’m just one of many good news stories that is going to come out of here in the next little while. (RPM is) definitely moving in the direction I want to head, and there’s no reason why we can’t be a major force in 2011."

His signing fills a second void in RPM's 2011 driver lineup, with two other slots still in doubt. AJ Allmendinger recently signed a two-year contract extension to remain in the #43 Ford, but both Kahne and Paul Menard are headed elsewhere in 2011 and Elliott Sadler said he has had no conversations with team officials about returning for next season.
Posted by Dave Moody at 7:20 PM