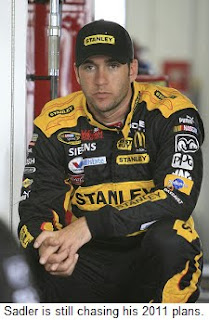 Elliott Sadler told Sirius NASCAR Radio’s Sirius Speedway with Dave Moody Tuesday that he expects to know his future plans within the next 2-3 weeks.

Sadler is unlikely to return to Richard Petty Motorsports in 2011, after co-owner Richard Petty said the team is likely to scale back to just two cars next season with drivers AJ Allmendinger and Marcos Ambrose. Sadler's current sponsor, Stanley Tools, will back Ambrose next season.

“I have really enjoyed running up front in the Nationwide and Camping World Truck Series’ these last few weeks,” said Sadler, “and I’m hopeful that within the next couple of weeks, I can say, `Dave, this is what I’m going to do in 2011.’ I’m not necessarily saying I’ll be in the Nationwide or Trucks, though. I am also talking to Sprint Cup team that is looking at the possibility of expanding with an additional car next season. We’ll see what happens.”
Posted by Dave Moody at 5:01 PM