CONFIRMED: Papis Back To Trucks In 2011, Mears Takes Over Cup Ride at Atlanta 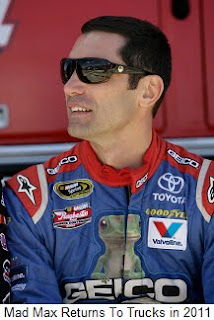 Max Papis confirmed today what Sirius Speedway first reported more than a week ago, that he will drive a #9 GEICO Toyota Tundra full-time in the NASCAR Camping World Truck Series beginning in 2011. Papis has been racing for Germain Racing on the NASCAR Sprint Cup Series this season, but has struggled to gain experience in a campaign filled with start-and-park efforts. He notched his first career Sprint Cup Series Top 10 with an eighth-place finish at Watkins Glen International last year.

Papis will turn his attention to the #9 GEICO Toyota Tundra effective immediately, beginning tonight at Bristol Motor Speedway. He will compete in three additional Camping World Truck Series races this season, in an effort to lay a solid foundation for 2011. The Truck Series effort will also be fielded by Germain Racing, which currtently fields Toyota Tundras for point leader Todd Bodine.

"Since I came to NASCAR, one of my goals has been to have the opportunity to run a complete racing schedule," said Papis, whose resume includes wins in the 12 Hours of Sebring, Petit Le Mans and CART (three times), two wins in the prestigeous Rolex 24 at Daytona and the Grand-Am Rolex Series championship in 2004. "When GEICO and Germain Racing approached me with an offer to represent them for a full season in the Camping World Truck Series, I saw it as a unique opportunity that I simply could not turn down.

"I want to take this opportunity to express my appreciation to all the fans, both new and old, who have supported me throughout my career and who are an important part of the success I have experienced. I am very excited by this opportunity and you can bet on my doing everything I possibly can to bring success to GEICO and Germain Racing."

Casey Mears will take over the #13 GEICO Sprint Cup Toyota beginning at Atlanta Motor Speedway on September 5.
Posted by Dave Moody at 2:17 PM