The Trouble With Junior

Dale Earnhardt, Jr. fans, it wasn’t supposed to be like this.

After an abysmal 2009 campaign that saw him finish 25th in points while his Hendrick Motorsports teammates claimed the top three spots in the championship standings, 2010 was supposed be a season of vindication for the man known simply as “Junior.” Team owner Rick Hendrick made “fixing the 88 team” his number-one offseason project, and when the AMP Energy/National Guard Chevrolet began the season with a runner-up finish in the Daytona 500, it looked like he had made good on that promise. 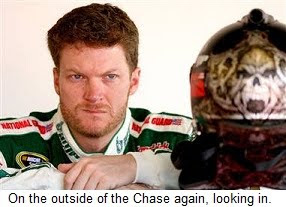 Since then, however, it’s been one long, downward spiral for NASCAR’s Most Popular Driver. With just four races remaining until the 2010 Chase field is set, it’s becoming clear that Earnhardt will once again be on the outside, looking in. With just two Top-5 and six Top-10 finishes in 22 starts this season, he left Watkins Glen 16th in points; 121 behind 12th place Mark Martin. Based on the performance of his #88 team lately, it’s an insurmountable deficit.

A month ago, there seemed to be a chance. Back-to-back Top-10 finishes at New Hampshire and Daytona provided a brief infusion of momentum and inspired hope that Earnhardt and crewchief Lance McGrew could rally the troops for a late drive to the Chase. Ignore the fact that his Daytona finish came only after a late-race melee eliminated a dozen cars and elevated him from the mid-teens to fourth. A lackluster 23rd at Chicagoland brought the team back to earth, and was followed by 27th-place showings at Indianapolis and Pocono and a woeful 26th last week at Watkins Glen after qualifying 40th.

“We’re not a good race team,” said Earnhardt recently, voicing an opinion the rest of NASCAR Nation adopted some time ago.

How things have changed since the start of the season, when Earnhardt expressed confidence, optimism and an air of bravado that energized his fan base. "Our goal is to win as many races as we can, win a championship, challenge for the championship," said Earnhardt at the time. "I think anything less than three (wins) this year, I'd be a little disappointed."

Disappointment doesn’t begin to describe it.

Earnhardt drove like a beaten man Sunday, calling his car “the worst I have ever driven." He jousted feebly with drivers like Travis Kvapil, David Gilliland and Regan Smith; all of whom have a tiny fraction of his financing, manpower and resources at their disposal. He looked like a man counting the days until another nightmare season can be put in the rearview mirror, not the man who vowed before a fawning SpeedWeek crowd to be “ruthless from the first lap to the last."

Diehard Earnhardt fans insist that his 16th-place championship standing is nine positions better than a year ago. And that, they say, qualifies as progress. But when your name is Earnhardt, “better” isn’t good enough. Nothing short of “best” will do. 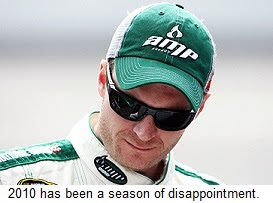 A long line of scapegoats has walked the plank on Earnhardt’s behalf in recent seasons. It began with Teresa Earnhardt, the Evil Stepmother who refused to provide him with the resources necessary to win. The DEI engine department took its share of the blame after a slew of motor failures prevented Junior from taking his rightful place at the head of the NASCAR class. Tony Eury, Jr., was pilloried for his inability to provide Earnhardt with winning racecars, much the way McGrew is criticized today. Even Hendrick himself is now subject to scrutiny, as fans wonder how their driver can continue to struggle so horribly.

"I don't really put a whole lot of pressure on myself,” said Earnhardt once. “I've already accomplished more and gotten further in the sport than I ever dreamed." And on that point, perhaps he is correct.

Perhaps there’s nothing wrong with being a 12th to 15th-place driver at the highest level of the sport, even if your name is Earnhardt. Perhaps it’s okay to be a two-time NASCAR Nationwide Series champion, rather than a seven-time Sprint Cup king.

Maybe the problem isn’t Dale Earnhardt, Jr., after all.

Maybe the problem is us, and our expectations.
Posted by Dave Moody at 11:55 AM