After knocking on the door to Victory Lane countless times in five previous runnings of the Prelude To The Dream at Eldora Speedway in Rossburg, Ohio, Kyle Busch finally broke through Wednesday night to score his first win in the all-star dirt Late Model race benefiting Feed The Children. 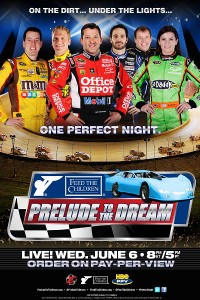 “This is cool,” said Busch, who outlasted strong challenges from Kasey Kahne and Clint Bowyer before finishing 2.283 seconds ahead of runner-up Tony Stewart. “This is what it’s all about when you go dirt racing. It’s a lot of fun. I can’t say enough about (team owner) Scott Bloomquist and all these guys. They give me great racecars every time we come here and I’ve torn them up a few times, including tonight. We were able to come back through, get a good heat race, get a good starting spot for the main event and run up front there with the leaders all night.”


Busch started the 40-lap feature event in second place and dueled with Kahne and Bowyer, who together led the first 24 laps (Kahne 1-12; Bowyer 13-21; Kahne 22-24). Busch took over on lap 25 when Kahne suffered a hard crash into the spun car of Bobby Labonte, sidelining both drivers for the night. Busch then checked out, beating three-time Prelude winner Stewart to nab his first career victory at Eldora.


“When Kahne had his mishap, we inherited the lead and just were able to set sail from there,” Busch said. “I felt like Kahne had a fast car tonight. He was probably the class of the field. Bowyer was really hustling hard and making it work through traffic and got by him. Then we caught the lapped cars and everybody just slowed down. The pace slowed up and everybody got loose trying to slide each other. Crazy, freak deal there with Kahne sliding (into Labonte) in (Turn) Three. From there, we had 16 laps to go and it felt like the longest 16 laps of my career here at Eldora.”
Austin Dillon finished third in his second Prelude To The Dream start, with four-time World of Outlaws Sprint Car Series champion Donny Schatz fourth in his dirt Late Model debut. Stewart’s Stewart-Haas Racing teammate, Ryan Newman, finished fifth. Aric Almirola, Cruz Pedregon, Dave Blaney, Ty Dillon and Justin Allgaier completed the Top-10, with each of the first 10 finishers receiving a tractor-trailer filled with food from Feed The Children, delivered to their hometown or city of choice.


Stewart, owner of Eldora Speedway, took great pride in seeing the sixth different winner take the checkered flag in the charity race he created back in 2005.


“We had another first-time winner tonight. That’s what the fun part is,” said Stewart, who like the rest of his Sprint Cup colleagues flew to Eldora immediately after a NASCAR Sprint Cup Series test at Pocono (Pa.) Raceway. “There’s a lot of stuff going on. Five days in a row at Pocono, and for these guys to leave practice at the end of the day today, fly here and race, and then fly back to Pocono tonight and be back in cars at Pocono at nine in the morning, I think that speaks volumes to what this event is all about and what it means for these guys to be here. I’m honored they were that committed to doing this with us tonight to benefit such a good cause as Feed The Children.
Posted by Dave Moody at 9:53 AM