Welcome To The Family, Tony! 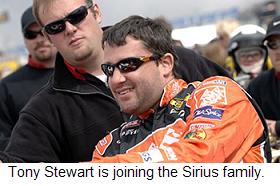 The announcement represents the first in what is expected to be a series of programming initiatives, leading up to the arrival of NASCAR Nextel Cup, Busch and Craftsman Truck Series racing on Sirius Satellite Radio in February of next year. Every Cup, Busch and Truck race will be heard live next season on Sirius, the new Official Satellite Radio provider of NASCAR.

Stewart announced the new deal in a 4 p.m. ET press conference at the speedway, then stopped by for an exclusive conversation with us on Sirius Speedway. "I'm really pumped up about this," he said. "If your listeners are half as excited as I am, we're going to have a good time. What I like about this is that I will be abe to talk to the fans on my terms. I can speak my mind better than if I was standing iin the media center in front of a bunch of microphones. It's a unique opportunity, and we plan to make the most of it."

Debuting in January (with sporadic "preview shows" between now and then), Tony Stewart Live will air Tuesdays from 8-10 p.m., exclusively on Sirius' new 24/7 NASCAR channel. The show will feature Stewart taking calls from listeners, talking with guests and covering the full spectrum of motorsports - from NASCAR to open-wheel racing and beyond. Fox and NBC puit reporter Matt Yocum will serve as co-host.

Coming off a 12th- place finish last weekend at Darlington Raceway, Stewart stands second in Nextel Cup championship points, 93 behind Jimmie Johnson. He will take part in Saturday night's NASCAR Nextel All-Star Challenge, as a prelude to next weekend's Coca-Cola 600.
Posted by Dave Moody at 9:18 AM