The Ball Is In Junior's Court

Teresa Earnhardt laid it on the line this week, saying of stepson Dale Earnhardt Jr., "…the ball's in his court to decide whether he wants to be a NASCAR driver or…a public personality."

In most instances, that kind of talk attracts little attention outside the family. Stepmothers have been known to question the focus and commitment of their stepchildren from time to time, but when the stepchild is the namesake of an honest-to-goodness NASCAR legend, and the stepmother doubles as CEO of the family business, things get a bit more complicated. 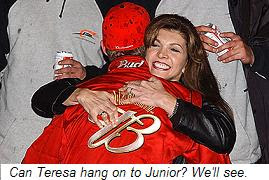 Teresa Earnhardt is correct when she says the ball is in Junior’s court. With just 12 months remaining on his current contract with DEI, “Driver 8” could soon have the entire NASCAR world groveling at his feet. Should he opt for a change of venue in 2008, there’s not a team in the Nextel Cup garage that won’t put out the Welcome Mat for him. NASCAR’s Most Popular Driver (the second-place man isn’t even close) would bring an army of apparel and diecast-buying fans to any new team he chooses, as well as a major sponsor -- Budweiser -- and more associate backers than you can shake a stick at. He hasn’t won a Nextel Cup championship of his own yet, but if Earnhardt elects to put his services up for bid at the end of next season, there are very few drivers whose job security won’t be adversely impacted.

DEI, meanwhile, would lose their main (some would say only) cash cow. Without Junior, Dale Earnhardt, Inc., would be no more noteworthy than Penske Racing South or Chip Ganassi Racing, and probably less marketable. As savvy as she is, CEO Earnhardt would be hard-pressed to find a replacement driver with even half of Junior’s “buzz,” and hard-pressed to find sponsors interested in spending anything close to the money Junior’s current backers do.

Teresa knows all that, but she also knows Junior has no intention of leaving the team his father built for him, unless he’s forced to do so. “Little E” has said repeatedly that he wants to win a championship at DEI, as a way of fulfilling his father’s legacy. Anything short of that will be considered a failure, and Junior doesn’t like to fail. The name over the door at Dale Earnhardt, Inc., may be his father’s, but it’s also his. And that name means more to him than all the music videos and satellite radio gigs in the world.

Clearly, DEI needs Junior much more than Junior needs DEI. Teresa Earnhardt has no real complaint with her stepson’s 2006 performance. The second-generation driver juggled the demands on his time masterfully, calling the shots at his own JR Motorsports Busch Series team and satisfying his many sponsors, while simultaneously making a legitimate championship run for DEI.

Still, Teresa is rightly concerned that there are too many distractions in Junior’s world these days; too many MTV appearances, movie cameos and side projects. Rather than worrying about JR Motorsports, she wants him fully focused on winning a Nextel Cup championship for DEI.

This week’s “NASCAR driver or…public personality" comment was the first step in what will be a long and complicated effort to convince him to do exactly that.
Posted by Dave Moody at 2:06 PM