Recently crowned NASCAR Nextel Cup champion Jimmie Johnson suffered a broken left wrist Friday in a golf cart accident during a charity golf tournament in Florida. The injury has forced Johnson to withdraw from the annual Race of Champions Nations Cup in Paris this weekend, but Johnson says he will attend the event anyway, to consult with Team USA. 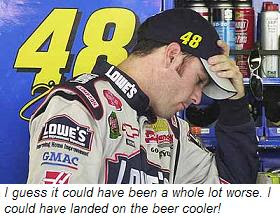 In his words, "I was in a golf cart, and the driver took a sharp turn. I wasn't holding on tight enough, landed awkwardly on the ground and heard a little pop.”

At least one published report today says that Johnson was lying on the roof of the golf cart when the incident occurred, but neither Johnson nor Hendrick Motorsports has commented on the story. He is wearing a cast today, and doctors estimate his recovery at four to six weeks. Johnson’s replacement on the Team USA roster has not yet been announced, but sources say Indy Racing League champion Sam Hornish Jr. has been contacted about the position.

This is the second consecutive year that NASCAR's reigning champion has been injured during the offseason. Tony Stewart inured his wrist and ribs last January in a qualifying crash at the Chili Bowl Midget Nationals.
Posted by Dave Moody at 1:35 PM