Jimmie Johnson may have won the Nextel Cup, but you’ll never guess whose sponsor got the most TV exposure this season. 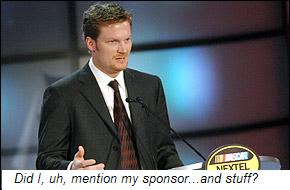 No, it’s not Jon Wood. It’s Dale Earnhardt, Jr., who put Budweiser on top of the list of most-exposed NASCAR sponsors, according to the Joyce Julius research firm. The King of Beers topped the charts with $183.1 million in exposure, with 68.8 percent of that total due directly to the efforts of the team, despite a fifth place finish in 2006 points.

Lowe’s was second at $143.6 million, followed by Cingular Wireless at $116.6 million. Home Depot and DuPont rounded out the top five.

Surprisingly, exposure did not necessarily equate to running up front. Kurt Busch struggled on the track this season, but Miller Lite was sixth in exposure, followed by NAPA Auto Parts (sponsor of omnipresent plugmeister Michael Waltrip), and Tony Raines' sponsor, DLP.
Posted by Dave Moody at 2:35 PM