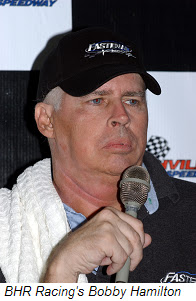 Ken Schrader will drive the No. 18 Fastenal-sponsored NASCAR Craftsman Truck Series Dodge for Bobby Hamilton Racing next season. Schrader will steer the BHR entry in the majority of NCTS events, with a to-be-determined driver filling in for Schrader when his Nextel Cup schedule conflicts. Schrader said he is looking forward to the partnership with Hamilton, adding, “Bobby Hamilton and I have been friends for a long time, so to get the chance to work with him is just an ideal situation for me.” 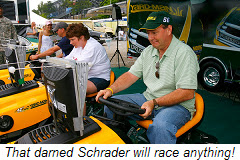 Hamilton also spoke optimistically about the deal, saying, “We are really happy to be able to get a driver the caliber of Ken Schrader for the Fastenal Dodge. We looked at a number of different drivers, but Kenny was just a perfect fit. He is a proven winner -- both on the track and off -- and he will help us win races and compete for championships in the future.”

Schrader has four NASCAR Nextel Cup wins, two NASCAR Busch Series wins and one NASCAR Craftsman Truck Series victory to his credit. All told, he has logged 283,398 miles in NASCAR’s top three divisions; the equivalent of racing around the world 12 times, or all the way to the moon and a quarter of the way back.

In other Truck Series news, fourth-place 2006 points finisher David Starr has been released by Red Horse Racing, due to a lack of sponsorship. He's expected to be replaced by Aaron Fike, who is bringing a sponsor to the team for 2007. Team owner Jeff Hammond said late last season that he hoped to expand to two trucks next season; with Starr driving one of them. Sponsorship reportedly could not be found however, leaving Starr without a ride.

Starr said of the move, “We had a pretty good year, and I was really looking forward to 2007. I thought we had a shot at the championship. When I got the news that it was a possibility that we wouldn't run because of the sponsor situation, it was really disappointing. But when it comes down to it… how many years can you take a loss? From a business standpoint. I understand.”

Starr said today that he hopes to have another ride lined up in a top NASCAR division within a week. He was orginally rumored to be in the running for the #88 Nextel Cup Ford ride at Robert Yates Racing, but denied those rumors a few weeks ago.

And finally, team owner Billy Ballew confirmed what we told you Monday, that he is close to finalizing a deal to run Bill Lester in his No. 15 Chevrolet next season.
Posted by Dave Moody at 4:33 PM