There’s an old saying that claims, “looks can be deceiving,” and Brendan Gaughan is living proof.

Despite standing just 5'9" tall and being unable to elevate both feet off the ground at the same time, NASCAR Craftsman Truck Series driver, Sirius Speedway favorite and hairy backed knuckle dragger extraordinaire Brendan Gaughan played college basketball for legendary coach John Thompson at Georgetown University. An admitted propensity for the free buffet at his family’s South Point Hotel and Casino has blessed him with the decidedly unathletic build of…oh…a radio talkshow host, making him one of the last people you would expect to actually run anywhere, unless he was being chased.

Don’t you believe it, though. 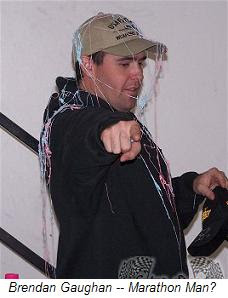 Our boy Gonzo recently competed in the 13.1-mile Las Vegas Marathon, after being “called out” by a friend who questioned his athletic prowess. Gaughan said, “He called me a chicken, and in the words of Michael J. Fox’s character in Back to the Future III, 'Nobody calls me yellow.’”

Against all odds (and at least three laws of physics) Gaughan completed the race in two hours, 53 minutes and 10 seconds. That won’t quite qualify him for the Olympic trials, but for a guy who trained by watching someone else work out on a Stairmaster one day, it’s not bad. He did lose neighborhood bragging rights by finishing one agonizing second behind his friend, however, and said afterward that marathoning may not be his true calling, after all.

“Every joint in my body hurts,” he said. “I've got no cartilage in my right knee - it's just bone on bone. I felt that every step of the way, and my feet hurt because my arches have fallen. It even hurts to breathe. I certainly don't have a marathoner's body.”

He may not have the slender build and titanium calves of Bill Rodgers, but I’ve got to give him credit. Gonzo’s got a lot of heart.
Posted by Dave Moody at 11:00 AM