NASCAR Banquet Not Half Bad

Somebody congratulate me. I made it through the 2006 NASCAR Nextel Cup Awards Banquet without losing consciousness.

That’s a new track record for this writer, who annually succumbs to the enticements of the Sandman within the first 90 minutes of NASCAR’s annual, post-season awards marathon. Somehow, the idea of tremendously rich athletes collecting a series of obscenely large paychecks has never been appealing enough to keep my chin off my chest for very long; despite the fact that I know and genuinely like most of the tremendously rich athletes in question.

Apparently, I have not been alone in that opinion.

This year, in an attempt to keep the Monday morning “NASCAR Banquet Sucks” columns to a minimum, NASCAR made a series of moves designed to trim the ceremony to a more-workable, three hour timetable. They shuffled many of the more obscure awards to Thursday’s NMPA/Myers Brothers Luncheon, lightening Saturday night’s load to only the Top-10 drivers, and Tony Stewart. The goal was to kiss the national TV audience goodnight by 10:15 p.m., and that’s almost exactly when the confetti cannon went off at the end of the evening.

That, to me, was enough to make up for the banquet’s shortcomings, of which there were a few. 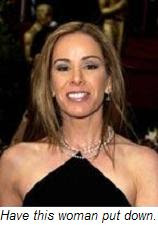 For instance, Melissa Rivers. The talentless daughter of comedienne, talkshow host and Botox overdose candidate Joan Rivers was simply awful in the pre-banquet show. Her performance on the “Yellow Carpet” -- in deference to series sponsor Sprint/Nextel -- was cliché, obnoxious and dull. Adding Michael Waltrip to the mix served only to double the number of uncomfortable, out-of-their element people standing in front of the camera. Note to Hollywood: have Melissa taken out and euthanized. 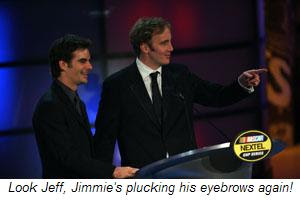 Returning emcee Jay Mohr was better this year. Some of the jabs he directed at NASCAR’s elite went over like lead balloons, but some were genuinely funny. His predictable “Jeff Gordon is a robot” and “Jimmie Johnson plucks his eyebrows” gags were met with little more than nervous twitters from the crowd, but his spoof of Kasey Kahne’s award-wining Allstate Insurance commercials was a big hit, and rightly so.

As always, most of the drivers’ acceptance speeches were as spontaneous as an Ashlee Simpson lip-synch. But for every soul-less, professionally written, “I couldn’t have done it without my crew” snoozer, there was at least one Kyle Busch, who stepped to the microphone to thank his girlfriend, “Eva.”

Kyle’s girlfriend is not named Eva.

Eva is his sister-in-law.

In hindsight, I have decided that the standards by which I have judged past banquets may have been a bit too high. After all, name one other awards ceremony that’s fun to watch. From the Oscars to the Emmys to the CMAs, they’re all hokey, self-important and long-winded; no different than NASCAR’s annual affair.

So that’s it. Count me out of the Monday morning, “NASCAR Banquet Sucks” crowd.

This year’s affair wasn’t that bad.
Posted by Dave Moody at 10:21 AM