For the record, I did not attend last weekend’s NASCAR Busch or Craftsman Truck Series banquets in Orlando, Florida. With all due respect to champions Kevin Harvick and Todd Bodine, after a long season of racing and four days in New York City covering the NASCAR Nextel Cup Series awards presentation, a weekend at home proved too enticing to pass up.

Unfortunately, it appears I may have skipped the wrong banquet. Everyone who attended the Busch and Truck affairs say they were everything I’m looking for in a NASCAR awards presentation: 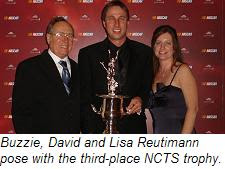 Friday night’s Busch bash was delightfully short on teleprompters, and long on spontaneity. NASCAR allowed its Top-10 Busch drivers to forego the nerve-jangling, formal acceptance speech in favor of a low-key, living-room couch conversation with NBC/TNT pit reporter (and new Sirius NASCAR Radio 128 host) Marty Snider. The drivers put their feet up and delivered a series of stories that kept the crowd laughing all evening long.

Kyle Busch revealed that his on-stage gaffe at the Waldorf-Astoria the previous week had not, in fact, cost him a girlfriend. Busch called his girlfriend Erica, “Eva” at the Nextel Cup banquet, which not-so-coincidentally is the name of his sister in law, Kurt’s wife. Snider asked Busch if he was still in the doghouse following the nationally televised flub, and Shrubby redeemed himself masterfully, saying, "I never was in it, and that shows what a sweet girl she is."

Denny Hamlin told of the night Kevin Harvick preyed on his previously little-known fear of lobsters, telling the audience, "I came back to my motor coach at one race, went into the bathroom and found a live lobster in the toilet. I know Kevin did it."

Asked what happened next, He-Man Hamlin replied, "I called my mom to come get it out.”

Hamlin was not the only driver to find himself in Harvick’s crosshairs this season. The 2006 Busch Series champion gleefully told the crowd that he had sent the bill for his post-season, 160-person championship celebration to Richard Childress Racing teammate Clint Bowyer.

“It's killing him," laughed Harvick. "There is no bigger mooch in NASCAR than Clint Bowyer." 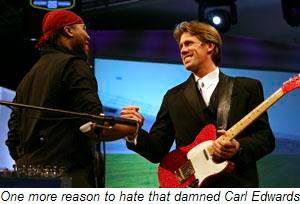 The hit of the night Friday came when Carl Edwards grabbed a guitar and sat in with Robert Randolph and the Family Band, rocking the house with some decidedly tasty licks, and giving us normal humans yet another reason to resent him.

The highlight of the weekend, however, came at Sunday night’s Craftsman Truck Series banquet, when brothers Brett and Geoff joined champion Todd Bodine on stage to celebrate the family’s first major NASCAR championship, after more than three 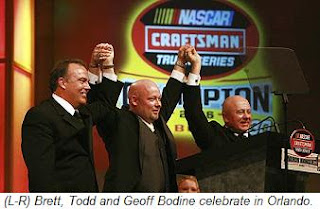 decades of trying. The pride they displayed in each other’s accomplishments was unmistakable, and the emotion of the moment far surpassed anything that occurred at the larger New York City festivities just a few days before.

Perhaps bigger is not necessarily better, after all.
Posted by Dave Moody at 11:19 AM