Michael Waltrip Racing announced today that Matt Borland is one of three new crewchiefs that will guide the organization during the 2007 NASCAR NEXTEL Cup Series season. 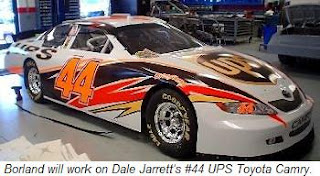 Borland, Larry Carter and David Hyder have been added to the MWR roster, with Borland designated crewchief for the No. 44 UPS Toyota and driver Dale Jarrett. Carter will work with the No. 00 Burger King/Dominos Toyota of David Reutimann, with Hyder wrenching Waltrips’ No. 55 NAPA Toyota.

Waltrip made the announcement today, saying, ”We concentrated on pairing personalities, to find the perfect qualified individuals for each position. Matt is a proven winner and we’re proud to have him steering the No. 44 UPS Toyota team. I’ve known David for a while and look forward to him leading the NAPA team. Larry was vitally important in building our teams, and I know he will be instrumental in building David Reutimann’s future.” 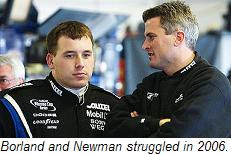 Borland, who led Ryan Newman to 12 wins, 37 poles, 54 top-fives, 83 top-10s in 186 NASCAR Nextel Cup Series starts, said, “I’m looking forward to making a new home at Michael Waltrip Racing and working with Dale Jarrett. Dale is a champion and he has a ton of respect in the garage. He’s obviously proven himself as a driver. Also, Toyota will be great to work with. I think Toyota is one of the most technologically advanced manufacturers.”

Carter is a former crewchief at Penske Racing South, while Hyder served as crewchief for Ken Schrader at BAM Racing in 2005, and Wood Brothers Racing this season.
Posted by Dave Moody at 1:23 PM