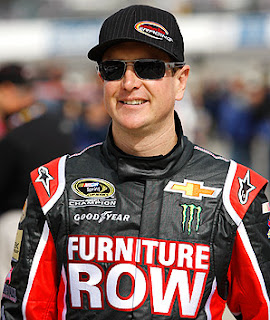 After claiming a solid, fourth-place finish in the opening round of the 2013 Chase at Chicagoland Speedway last week, Kurt Busch said Sunday’s race at New Hampshire Motor Speedway could be just what the doctor ordered for him and his single-car team.


“I like the long runs at New Hampshire; making your car work for 100 laps at a time,” he said. “With that said, you cannot sacrifice short run speed, and that's where I think our Furniture Row car got in trouble in the first race (there). Our car was a bit too vulnerable. We couldn't be aggressive on restarts and we got spun around by Kenseth. We have to protect our car better on short runs and still have that long run speed, in case it comes back to play.”
Busch said racing for a championship with a small team like FRR is different than competing with Roush Fenway or Penske Racing.
“With this small team, it's a big accomplishment,” he said. “And for me, it's very satisfying to have bounced back and put this group in Chase contention.  It's a Top-5 moment in my career, with a championship, big wins, consistency over the years, making seven out of 10 Chases… this year was a significant Top-5 type moment.
“It’s been an amazing ride, and to make the Chase with a single car team was a nice accomplishment and very gratifying,” he said. “Now, we are one week into it and we have a nice Top-5 finish.  We need nine more of those, along with a win. What keeps me even more hungry is that we haven't won yet, and I know we're capable of doing it.” 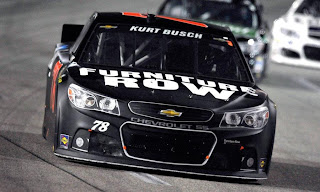 Asked what would make FRR a championship team, Busch said, “I wish I knew, because I'd implement it right now and we'd go to New Hampshire with it. I feel like we're a 95 percent team. We have a lot of tools that are strong (and) we go to the racetrack each week with raw speed. Our pit crew has improved, but we're missing that last five percent, and I don't know where it's coming from. They're a fantastic team… and there are just a couple small areas (where) I think they could improve.  But I don't know exactly what to do to pinpoint it.
“I wish we had it,” he added. “I think we could drive into Victory Lane with it next week.”
Busch admitted that periodic issues with his over-the-wall pit crew this season have prompted him to be more aggressive on pit road, leading to a series-high seven speeding penalties. He said his tachometer was in the green (safe) zone all the way down pit road before he was penalized for exceeding the speed limit at Chicagoland, meaning that ,”we're setting our pit road tachometer too aggressively and too close to the margin.
“We just have to be more conservative,” he said. “The thing that has to be clear internally with Furniture Row Racing is that the guy setting the tach isn't going conservative on his own. “We have to perform in this Chase.  We can't lose spots on pit road with slow pit stops and we can't lose spots driving too slow in the speed zone.”
While operating as a single-car team obviously has its drawbacks, Busch said there is also at least one advantage. “The strong suit… is the independence, being able to navigate through some of these waters a bit more aggressively,” he said. “We can steer our ship in a quicker direction and not have to report back to a big mother ship, so to speak.  Being able to navigate and get things implemented into the cars quickly is so refreshing.”
Busch also commented on the type of driver likely to replace him at Furniture Row Racing next season, saying, “I think the driver they're looking for would be somebody with experience, as well as somebody that has the potential to grow into… that role. (They’re) starting to run out of experienced drivers, such as Juan Pablo Montoya. He's made the announcement that he's going to Penske with an IndyCar program, and (they’re) now looking at guys like David Ragan or Scott Speed.” 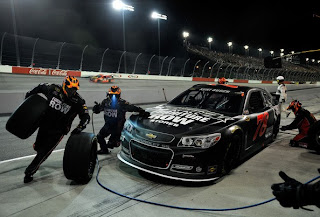 Busch also offered a suggestion of his own, saying, “One of the dark horses that nobody is really looking at that I think would be a good candidate is Josh Wise. But the list can go on and on. You have Blaney's son, you have Martin Truex Jr. Everybody that wants a Chase ride (and) this is a Chase car.
“I'm sure their phone is ringing off the hook, and I'm not mentioning the right names. But I see a young guy fitting in over there that can grow with the team, based off of what I've seen with their negotiations.”
In the aftermath of a team-orders controversy two weeks ago at Richmond International Raceway, Busch said, “I am relieved that I'm on a single car team. We raced our way into the Chase and did this all on our own, without any type of controversy. I have never been on this side of it to see how sick it gets, and how awkward it can feel.
“Those teams that were on the bubble put themselves in a position over 26 weeks to not be locked in,” he said. “What I'm trying to say is, `you have 26 weeks, why don't you try to run better (and) get yourself locked in, so with two weeks to go you're on easy street?’ Team orders are a Catch 22. You're trying to do your own thing independently, and at the same time, there's (an owner’s) name that's on the building. You have to adhere to what the general manager or the team president is telling you to do.
“Sometimes, you've got to do what the team tells you to do.”
Whether or not he wins the 2013 Sprint Cup championship, Busch said he has fulfilled the pledge made two years ago to find the fun in racing once again.
“It’s been a long journey and it didn't happen overnight, but I chose to settle into this program and find the genuine fun of (going) back to the racetrack (without) the distractions, requirements… and situations that kept developing with a big team like Penske Racing,” he said. “It was great to get a breath of fresh air, roll up my sleeves blue-collar style and work with the guys (at Phoenix Racing), then to do the same thing with the Furniture Row group.  It's been neat to have those small goals set, to achieve those goals, and then to set new ones.
“It's going great,” he said. “Success on the racetrack is one thing, and getting your priorities in life in order is another thing. Sometimes, you have to take a step back to make two steps forward.”
Posted by Dave Moody at 6:45 PM