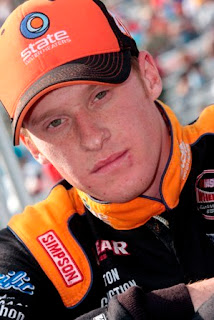 Jeb Burton will make his NASCAR Nationwide Series debut in the No. 34 Arrowhead Camaro at Kentucky Speedway next Saturday. The driver of the No. 4 Arrowhead Chevrolet Silverado for Turner Scott Motorsports is currently competing for the NASCAR Camping World Truck Series championship.


A native of South Boston, Virginia, the 21-year-old Sunoco Rookie of the Year contender currently sits fourth in the NCWTS championship standings. In 15 starts this season, he has one win and four Keystone Light Pole Awards.
"I'm really thankful for this opportunity," said Burton. "I can't thank Arrowhead enough for their ongoing support. It's all about the experience and the opportunity. At the beginning of the season, I set a couple of goals for myself and racing in a Nationwide Series race was one of them. My Turner Scott Motorsports team is the hardest working group of guys in the garage, so I'm confident we'll give it all we've got at Kentucky Speedway."
Burton will bring along his current crew chief Mike Hillman Jr. as well as his regular NCWTS team for the NNS race at Kentucky.
"Jeb has shown an incredible amount of dedication this season," said TSM co-owner Harry Scott Jr. "His passion and skill for racing is evident in his performance on the track. Providing Jeb with extra on-track experience is crucial for his career, and I couldn't be happier to give him an opportunity to race in the NASCAR Nationwide Series race at Kentucky. I'm grateful to have Jeb, along with Arrowhead, as members of our Turner Scott Motorsports family and look forward to growing together."
Posted by Dave Moody at 1:34 PM