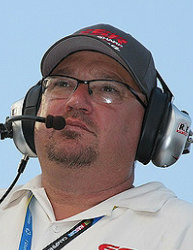 
Kelly Heaphy, girlfriend of driver Mike Skeen, was fined $2,500 and denied access to all NASCAR events indefinitely for her involvement in the altercation with driver Max Papis. Crew chief Bryan Berry was fined $2,500 for violating Sections 12-1 and 9-4A (Crew chief assumes responsibility for the actions of his team members).
"I'd like to apologize to our sponsors, Canadian Tire Motorsport Park and especially the fans on behalf of everyone at Sharp-Gallaher Racing for the incident that occurred following Sunday's race," said Sharp. “Although Kelly Heaphy is not an employee of SGR, we absolutely do not condone actions such as these from anyone associated with our organization.
“It is a shame that this overshadowed the first class event that NASCAR delivered in Canada. We have nothing but respect for NASCAR, and will not appeal the penalty assessed to crew chief Bryan Berry."
Posted by Dave Moody at 6:14 PM