Harvick Not Counting Points Just Yet 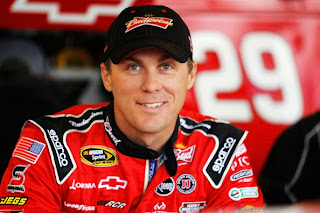 Sixth in the championship standings, 39 points behind leader Matt Kenseth, Kevin Harvick insists it’s too early to start obsessing about the rankings.


“I honestly haven't even really looked (at) the points deficit and paid attention to it,” he said. “For us, it's really about just going out and doing what you can week in and week out, and where you fall is where you fall. That's the cards that you were dealt.
“At one point, we strung together nine weeks in a row with Top-10 finishes and some wins. I think that’s what you need to do, to have a chance at winning the championship.
“If Matt keeps doing the things he's doing and winning every race, it's going to be hard for anybody to make up points,” said Harvick. “Those guys have run well this year, and we ran well at Chicago and overcame a lot of mistakes. Last week, we weren't able to overcome an ill‑handling car and make something out of it.”
The Richard Childress Racing driver said Sunday’s race on the Monster Mile at Dover offers an opportunity to close the gap and start a run of consistent finishes leading all the way to the season finale at Homestead Miami Speedway.
“I think the capability is there for us as a team to string some finishes together,” he said. “It's just a matter of putting the next eight weeks together. We've done it before this season, so we've just got to do it quick. You just have to go out and drive your car as fast as it'll go, and the guys on the team (have) to change the tires and make the right decisions, just as they would every other week.
“A lot of people think that we change our strategy,” said Harvick, “but our strategy is to try to win every week. Obviously you can't do that, so you have to try to pull the best finish that you can from that particular weekend. If you're having a good day, capitalize on it. If you're having a bad day, try to figure out how to create a decent finish and gain maximum points.
“It's really the same strategy, Chase or no Chase.”
Harvick said the key to a successful Chase is to improve from week to week.
“Everything has to get better,” he said. “You have to have a little bit better in each department.  It's really not one particular thing.  It's really not a conversation that you have to sit down and have.  I think everybody on our team has been around it long enough to know that in order to do better than what we've done in the past, we have to get better in every spot, whether it's the driver, the crew chief, the pit crew, and everything that goes with it.
Posted by Dave Moody at 1:39 PM