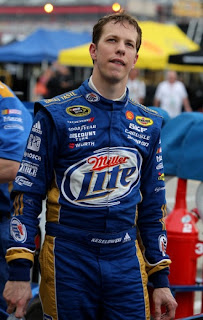 Ten months ago, Brad Keselowski was the toast of NASCAR Nation after claiming the 2012 NASCAR Sprint Cup Series championship.


Saturday night, the Michigan native became just the second driver to fail to make the Chase as defending series champion, racing to a disappointing 17th-place finish in the Federated Auto Parts 400 at Richmond International Raceway.
Keselowski came to Richmond as a longshot at best, winless in 2013 and a distant 15th in the championship standings. A third-place qualifying effort gave cause for optimism, however, and when his Miller Lite Ford surged past pole sitter Jeff Gordon and into the lead on Lap 50, it seemed the defending champion was primed to author an upset.
He led a race-high 142 laps Saturday and surged as high as 11th in the standings, but as the race wore on, his fortunes turned steadily south. He surrendered the lead by pitting for fuel and tires on Lap 268, and for the remainder of the evening, the “Blue Deuce” faded further and further from contention.
“We were pretty good at the start, and we led a lot of laps,” said a deflated Keselowski afterward. “We led the most laps, but we just weren’t strong enough to stay up there. We needed clean air to run well and once we lost that, we just weren’t strong enough.”
Keselowski said his Richmond disappointment mirrored much of the 23013 season.
“That is just the way our cars have been this year,” said Keselowski in his trademark, bottom-line style. “They haven’t been good enough, and we haven’t executed as well as we need to. We have work to do.
“At the end of the day, points (are) the best measuring stick in sports. You know who deserves to be where, because the results speak for themselves. We didn’t have enough results to get where we needed to be.”
Now, Keselowski becomes the first defending series champion to miss the Chase since Tony Stewart in 2006. There will be no back-to-back titles, no oversized beer mug toasts from the champion’s stage at Homestead Miami Speedway. Instead, he will play-out the string while others – including Penske Racing teammate Joey Logano -- compete to succeed him as champion. He enters the final 10 races of the season a distant 16th in points, with few goals other than to win a race or two before it’s over and set the stage for another try in 2014.
"Brad has done a great job for us,” said team owner Roger Penske late Saturday night. “I told him before the race, 'We might not get in, but (racing) is like business. You will have some good months and some bad months.' He deserved better than he got, and I think we let him down a couple of times. But he is a class guy and great to have on the team.”
Keselowski, meanwhile, struggled to put his championship shortfall into perspective. “I don’t really have any emotions right now,” he said, apparently at a loss for words for one of the few times in his career.
“We weren’t good enough to make it, and we didn’t. That is the reality.”
Posted by Dave Moody at 8:33 PM