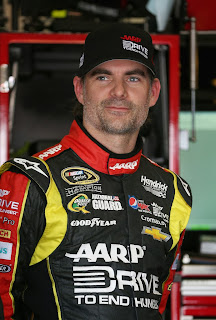 n Sunday’s Hollywood Casino 400 at Kansas Speedway, Jeff Gordon will be searching for the fine line between top performance and disaster in his second run on Goodyear’s new multi-zone tread tire.


Earlier this year at Atlanta Motor Speedway, Goodyear introduced the new tire to the NASCAR Sprint Cup Series for the4 first time on an intermediate track. Gordon led 17 laps that day en route to a sixth-place finish and has high praise for the tire.
"I really enjoyed racing on the tire in Atlanta, and I'm looking forward to racing on it again this weekend," said Gordon. "Even though it's been a couple races since it's been repaved, I still think of Kansas as a 'new' repave.
“There's more grip with the soft-side of the new tire and I hope it provides more forgiveness on the smooth track and gives us a better feel for the grip level."
Sunday  at Dover, Gordon and his No. 24 AARP/Drive To End Hunger Chevrolet team played the fuel mileage game admirably, before a late-race caution spoiled their strategy. The four-time Sprint Cup Series champion finished fourth, moving into a tie for fourth in the championship point standings. He was able to shave three points off Matt Kenseth's lead and said a 39-point gap is not insurmountable.
"If Matt and Jimmie (Johnson) continue to post wins and good finishes, it's going to be difficult to catch them," said Gordon. "But I like how our team has stepped up during the Chase and we need to be ready to take advantage if they have a bad race.
"Running the way we are right now, you really look forward to the next race."
That next race comes in Kansas, where Gordon has two wins (2001 and 2002), along with eight Top-5 and 10 Top-10 finishes in 15 career starts. After crashing during qualifying in April, Gordon raced from the rear of the field in a backup car to crack the Top-10 with just under 100 laps remaining. An ill-timed caution flag during his final pit stop trapped him one lap down, however, relegating him to a 13th-place finish at the drop of the checkered flag.
"We had a disappointing start to that weekend, but this team worked hard and the backup car was fast," said Gordon. "Our setups have evolved a lot since then, so we'll work hard again starting with Thursday's test and see if we can have another strong car for Sunday's race."
Posted by Dave Moody at 1:47 PM