Truex On Richmond Fallout: "It's Been Rough" 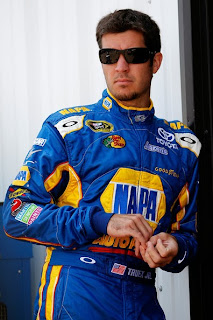 It’s been a difficult three weeks for Martin Truex, Jr.


The Mayetta, NJ, native was momentarily a 2013 Chase qualifier until evidence of on-track impropriety in the regular-season finale at Richmond International Raceway resulted in a NASCAR points penalty that eliminated him from title contention. Last week, sponsor NAPA revealed that they will end their involvement with the team two years early, leaving Truex’s continued employment in doubt.


“It’s been rough, for sure,” said Truex this week, after leading 98 laps en route to a 10th-place finish at New Hampshire Motor Speedway Sunday. “But that’s the way it goes sometimes. I wish we could have led the last lap Sunday. That would have made things a lot better.


“I’m so proud of all the NAPA guys for staying focused, keeping a great attitude and giving me the best car I’ve had at New Hampshire since I came to Michael Waltrip Racing,” said Truex. “I’m really proud of Chad (Gordon) and all the guys on the team, and I was disappointed that I didn’t get them a better finish. The track got away from us again like it did at Chicagoland. The weather changed quite a bit and we never could quite get (the setup) in the second half of the race. I was disappointed in the result, but very proud of the team and what we were able to do all weekend long.”


Truex said he is unhappy with the uncertainty surrounding Michael Waltrip Racing, but realizes he is not the only one affected.


“It’s a difficult time for everybody, trying to figure out what’s going to happen going forward,” he said. “What happened (at Richmond) affects more than just our team. It affects everyone at Michael Waltrip Racing. There are 300-odd people working there that are all wondering what’s going to happen. Hopefully, everything will work out for the best, for everyone.”


While Waltrip said last week that he would like to retain him as part of a three-car MWR stable next season, Truex said he remains unsure where his future lies.


“I feel like we have a lot of unfinished business at MWR and I have really enjoyed my time there," he said. "They’ve been great to me and treated me like family. But this is a very confusing situation. It’s complicated when something like this happens so late in the season. Ultimately, I need to race a car next year in the Sprint Cup Series.


“At the end of the day, I would love to stay at MWR. But there are so many things that have to happen to make that a reality, and I’m not sure where any of those things stand right now. I’ve got to make some decisions. I never saw any of this coming and we’ve got a lot figure out in a short amount of time. “


Truex said he has had preliminary discussions with other teams about next season, while also continuing to talk with MWR.


“I’m trying to give Rob (Kaufman) and Michael time to figure all this out and see if they can come up with a solution that will put us on the race track in a competitive car,” he said. “I’m also trying to figure out what’s available elsewhere, and what my options are. At this point, I’ve got to look at all options, (but) I can’t really say I’ve talked seriously to anybody. Nobody has said, `Here’s a deal, do you want it or not?’”


While upset with the way things unfolded at Richmond, Truex said he understands that MWR’s actions were undertaken in an attempt to bolster his chances to make the Chase.


“It’s like they say, `The road to hell is paved with good intentions.’”
Posted by Dave Moody at 2:20 PM