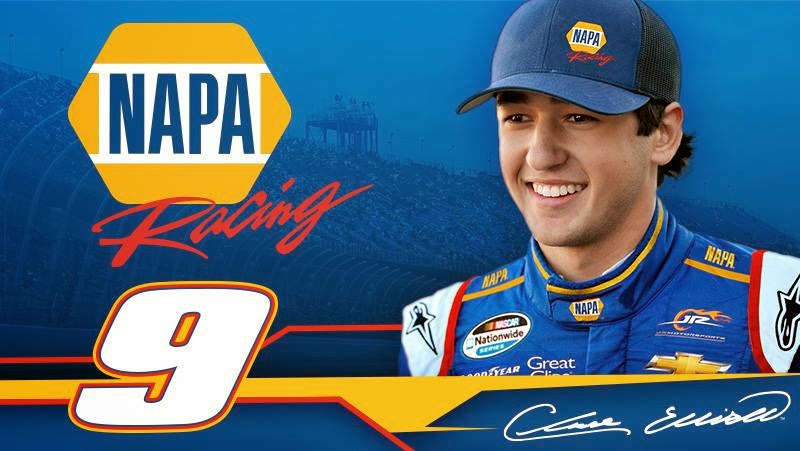 Chase Elliott will compete full time in the NASCAR Nationwide Series for JR Motorsports beginning in 2014, with NAPA AUTO PARTS as his full-season primary sponsor.


The 2014 season will mark the 19th year of NASCAR sponsorship for NAPA, which boasts has more than 6,000 stores nationwide. The company’s headquarters in Atlanta, Ga., is just a short distance from Elliott’s hometown of Dawsonville.
“NAPA is pleased to continue its long standing involvement in NASCAR, the most popular form of motorsports in the United States supported by its many loyal and passionate fans,” said Dan Askey, President of NAPA. “Equally, we are proud to form this new partnership with JR Motorsports. Kelley Earnhardt Miller, Dale Earnhardt, Jr., Rick Hendrick and its many employees have developed one of the premier teams in the Nationwide Series. Chase Elliott is a young and talented, future star in the sport and will represent NAPA well both on and off the track. We welcome Chase and the entire JR Motorsports organization to the NAPA Family.”
Elliott will carry the No. 9 on his NAPA Chevrolet – the same number his father, legendary racer Bill Elliott, carried for much of his storied career that included the 1988 Sprint Cup Series championship. The 2014 season will mark the younger Elliott’s Nationwide Series debut. He turned 18 on Nov. 28, becoming eligible for competition.
“This is the opportunity of a lifetime,” said Elliott. “My family and I are still trying to believe it all. I couldn’t ask to be partnered with anyone better than Dale Jr., Kelley and Mr. Hendrick, along with all of the people at their organizations who have put in countless hours to pull this together. 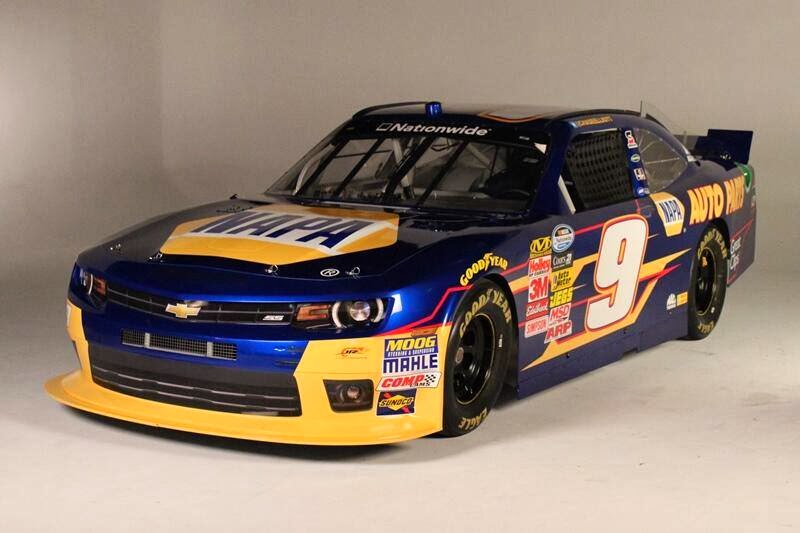 “Working with NAPA will be an honor. They’ve had a tremendous impact in NASCAR, and I’m proud to represent their brand, on and off the track, to race fans. I’m extremely pumped to get to work in 2014 with that first trip to Daytona and make the most of this opportunity.”
Elliott’s ascent through super late models and other national touring divisions is decorated with wins and accolades. The Georgia Racing Hall of Fame named Elliott its 2013 Driver of the Year after winning the All-American 400 at historic Nashville Fairgrounds and becoming the first driver to win all four Super Late Model majors.
He was signed by Hendrick Motorsports owner and JR Motorsports partner Rick Hendrick in 2011. He scored his first NASCAR K&N Series win at Iowa Speedway on May 19, 2012, and became the youngest superspeedway winner in ARCA (Automobile Racing Club of America) history at Pocono Raceway on June 8, 2013. His splash into the NASCAR Camping World Truck Series reset the record books. He became, at the time, the youngest winner in series history in only his sixth start – Sept. 1, 2013, at Canadian Tire Motorsports Park.
“Chase has been extremely successful, and I think the Nationwide Series is only a short step for him,” said JR Motorsports owner Dale Earnhardt Jr. “With the infrastructure we have at JR Motorsports and our close-working partnership with Hendrick Motorsports, we have every opportunity to continue Chase’s development as a driver while contending for a championship. He’s that good.
“The key in this is NAPA, and I feel privileged to welcome them to my race team after working with them so extensively earlier in my career. I recognize – and I think Chase does, too – the responsibility that comes with representing a company so significant in the lives of NASCAR fans. We welcome the opportunity and appreciate what NAPA means to this sport.”
The addition of Elliott and the No. 9 NAPA team gives JR Motorsports two full-schedule teams to compete for a championship in 2014. Regan Smith and the No. 7 TaxSlayer.com team will return after a 2013 run of two wins. JR Motorsports will also field two partial-schedule teams – the No. 5 with Kevin Harvick and the No. 88 with Earnhardt Jr. Greg Ives will serve as Elliott’s crew chief on the No. 9, with Ryan Pemberton taking over the No. 7 and Ernie Cope the No. 5.
“This will be the strongest line-up we’ve put on the track since we started racing full time in 2006,” said Kelley Earnhardt Miller, general manager of JR Motorsports. “We experienced very big gains this past year by all our teams and drivers. Regan tied our best-ever finish in points, and we won two races. We pride ourselves on competing for wins, and all four of our drivers are capable of doing that any given week.”
By taking on the full 33-race schedule, Elliott has the chance to become only the fifth multi-generational NASCAR champion, as only Richard Petty (Lee Petty), Larry Pearson (David Pearson), Dale Jarrett (Ned Jarrett) and Earnhardt Jr. (Dale Earnhardt Sr.) have accomplished such a feat. Bill Elliott’s 1988 Sprint Cup title came during a season in which he recorded six of his 44 career wins. Known affectionately as “Awesome Bill from Dawsonville,” Bill Elliott is a two-time winner of the Daytona 500, a member of the Motorsports Hall of Fame of America, and a 16-time winner of NASCAR’s Most Popular Driver Award.
“No doubt the historical element of this is pretty cool,” said Earnhardt Jr. “Bill Elliott is one of the greats. I’ve always looked up to him. He had some great battles with my dad. Certainly The Winston in 1987 is an all-time favorite. It was probably some of the hardest racing you’ll see, and it’s fun to watch even to this day. I think there are a lot of Elliott fans and Earnhardt fans that will take interest in Chase’s career and support him 100 percent.”
Elliott signed with Hendrick Motorsports when he was just a freshman in high school. Since 2011 his family-owned team, Bill Elliott Racing, has received support from the Rick Hendrick-owned organization while it toured super late model, pro late model and NASCAR regional events. Hendrick Motorsports fielded a truck for Elliott in nine Camping World Truck Series events in 2013, to which he finished sixth or better in his first six races. That included his victory in the Chevrolet Silverado 250 at Canadian Tire Motorsports Park on Sept. 1.
“Chase is the genuine article,” Hendrick said. “It’s been fun to see him grow, and all the credit goes to Bill and Cindy for how they’ve guided him. He’s a real talent, and his next steps will be exciting to watch.
“The commitment from NAPA speaks volumes, and bringing together the Elliotts and Earnhardts – two incredible racing families – will energize our fans. I can’t wait to see that No. 9 NAPA Chevrolet with another talented Elliott behind the wheel. This is a great announcement for our sport.”