By contemporary standards, Julius Timothy “Tim” Flock was a late bloomer. Flock was 24 years of age when he competed in his first stock car race in 1948.
But the Fort Payne, Ala., native, who raced out of Atlanta, was a quick study finishing second in NASCAR’s inaugural season of modified stock car competition. Flock, along with older brothers Fonty and Bob, were among the field of 33 drivers competing in the organization’s first Strictly Stock – now NASCAR Sprint Cup Series – race at Charlotte, N.C., in June 1949.
Tim Flock won the premier series championship in 1952 and again in 1955 to become NASCAR’s second two-time champion. He competed in 187 races over 13 seasons winning 39 times. Flock’s best year was 1955 in which he won 18 races and 18 poles driving the famed No. 300 Chrysler 300 for outboard motor manufacturer Carl Kiekhaefer.
In an era of rough and tumble competition – mostly on dusty and often rutted dirt surfaces – Flock was known for his precise driving skills. 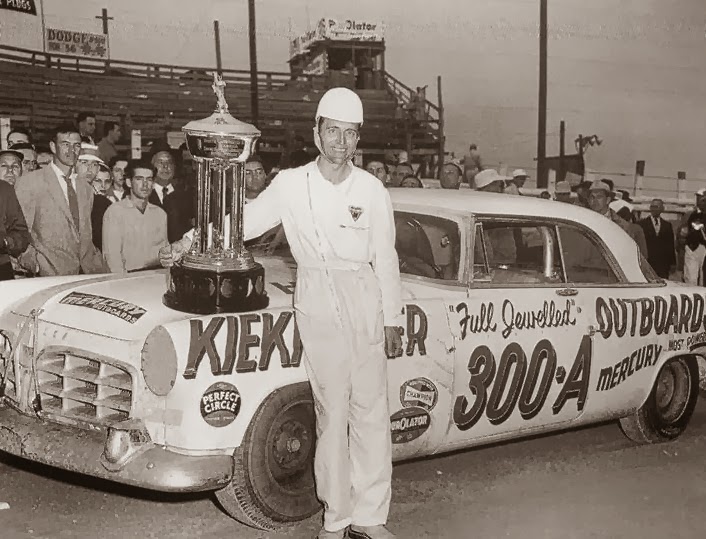 “To me, he was a cool customer,” said NASCAR Hall of Famer Richard Petty, who broke Flock’s season victory record in 1967. “You would see a bunch of them drivers running sideways. Tim would just be running around.
“When the race was over, Tim won. Those other guys were still running sideways.”
Flock retired after the 1961 season and spent 30 years in marketing at Charlotte Motor Speedway, dying in 1998 at age 73.
“He was truly one of the heroes of his day,” said the late Bill France Jr., then NASCAR’s president upon Flock’s passing.
Flock was named one of NASCAR’s 50 Greatest Drivers in 1998. He previously was enshrined in the International Motorsports, Motorsports Hall of Fame of America and National Motorsports Press Association and Georgia Racing Halls of Fame.
The Flock clan – eight sons and daughters of textile worker Lee Flock and his wife, Maudie – lived on the edge to say the least. Lee Flock was a tightrope walker and bicycle racer. Older brother Carl raced speed boats. Sister Reo was a dare-devil parachutist, who got paid $50 a jump at fairs and airshows. Bob and Fonty Flock hauled moonshine for an uncle, Peachtree Williams, one of the region’s highest-producing bootleggers. Another sister, Ethel Mobley, also raced stock cars. The family moved to Atlanta after Lee Flock’s death while Tim Flock was a young child. 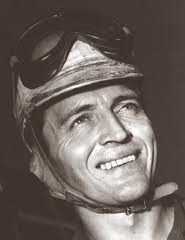 Both Bob and Fonty – whose given name was Truman Fontell – were dead-set against their younger brother driving race cars, as was their mother. Tim Flock accompanied his siblings to a race in North Wilkesboro, N.C., where another competitor asked the younger Flock to “hot lap” his modified – which he did and a career was born.
Ultimately, Tim Flock out-classed his racing siblings. Fonty Flock won 19 Strictly Stock races between 1950-56 and finished second in the 1951 championship standings. Bob Flock, who began racing before World War II, won four times and was third in NASCAR’s first premier series campaign in 1949. Four Flocks competed in the July 1949 Daytona Beach & Road Course race in which Mobley finished 11th in her husband Charlie’s Cadillac beating two or her three brothers. Tim finished second.
The Flocks were part of a so-called “Georgia Gang” that featured prominently in NASCAR’s pioneer era. Driving for Dawsonville, Ga.’s Ted Chester, Tim Flock won the 1952 championship in a Hudson Hornet despite breaking an axle and flipping the car in the season’s final race at West Palm Beach, Fla.
“I bet I’m the only driver who has won the championship on his head,” Flock said in an article penned by Brandon Reed for GeorgiaRacingHistory.com.
In 1953, Chester, a one-time race promoter, bought a Rhesus monkey in an Atlanta pet shop. He named the primate “Jocko,” installed a seat in the race car and taught the monkey to pull a chain that opened a trap door built into the car’s firewall so that Flock could check tire wear. 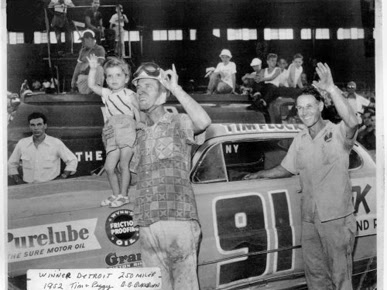 “I thought Ted had been hittin’ the jug too much. He couldn’t be serious. But the more I got to thinking about it, the more I liked it,” said Flock in Larry Fielden’s book, Tim Flock, Race Driver. Flock and Jocko won a race together at Hickory, N.C., but the pairing was short-lived. A few weeks later, at Raleigh (N.C.) Speedway, the monkey was hit in the head by a pebble, let out a scream and landed on Flock’s back.
“It was hard enough to drive those heavy old cars back then under normal circumstances but with a crazed monkey clawing you at the same time, it becomes nearly impossible,” said Flock, who had to pit to remove his frightened passenger.
Flock sat out most of the 1954 season after an apparent Daytona victory was overturned due to a carburetor infraction. He went to Florida the following February without a ride but was hired by Kiekhaefer after being overheard saying about the Chrysler 300 that, “If I had that car, I’d win this race again this year.” He shattered the qualifying record by nearly seven miles per hour, finished second but got the victory when the Buick of fellow 2014 NASCAR Hall of Fame inductee Fireball Roberts was disqualified for an engine infraction.
He won two premier series races on the 4.1-mile Beach & Road Course, both for Kiekhaefer. Flock was the only driver to win on every NASCAR division there – Strictly Stock, convertible and modified stocks. Flock finished ninth in the inaugural Daytona 500 in 1959 driving a Ford Thunderbird.
Flock’s last victory came in 1956 at Road America in Elkhart Lake, Wis., where he drove a Mercury for Bill Stroppe. Along with contemporary Curtis Turner, Flock faced a lifetime ban from NASCAR in 1961 for supporting a driver’s union. He was reinstated in 1965 but did not return to competition in the premier series. His last driving appearance came in a 1991 Winston Legends race on a 0.25-mile track at Charlotte Motor Speedway.
“Tim was a great ambassador for racing,” said his widow, Frances Flock. “He would sign autographs and stop to talk to people. If somebody wrote Tim a letter, he would write them back. He was always such a gentleman.”