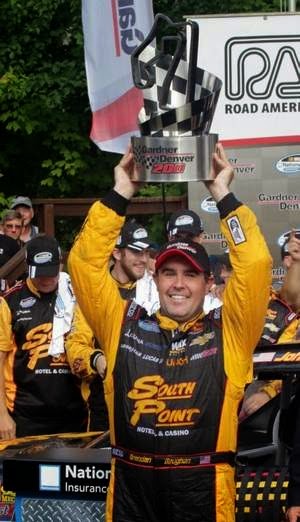 Brendan Gaughan knows a thing or two about gambling.

His late grandfather, Jackie Gaughan, was a pioneer in the Las Vegas casino industry and once owned more than 25 percent of the available real estate in downtown Las Vegas. His father, Michael Gaughan, currently owns the South Point Hotel and Casino and was enshrined in the Gaming Hall of Fame in 2009.

Saturday at Wisconsin’s Road America road course, the latest chapter in the “Gambler Gaughan” saga was written, as Gaughan rolled the dice and came up a winner in the Gardner Denver 200 NASCAR Nationwide Series race. It was Gaughan’s first Nationwide win in 98 career starts, and like a five-card blackjack win, it did not come easily.

Delayed nearly two hours by rain showers that dampened the course too much for NASCAR’s traditional racing slicks, but not enough to allow the use of wet-weather tires, Saturday’s race played out in three distinct parts. The first 25 laps were run under overcast-but-dry skies, with pole sitter Alex Tagliani, Sam Hornish, Jr. and Gaughan all spending time at the front of the pack. Rain began to fall in earnest on Lap 25, however, forcing NASCAR to call the field to pit road and bolt-on the treaded, wet-weather tires. After a lengthy period of slipping and sliding, the rain abated and the sun actually broke through, forcing drivers to tiptoe through the final laps on rapidly deteriorating tires.

It was a situation tailor-made for a born gambler like Gaughan.

“I love racing in the rain,” said Gaughan, who was outside the Top-20 when the rain came, due to an early pit stop and a minor off-road excursion. “When it started to rain, I smelled blood in the water.” 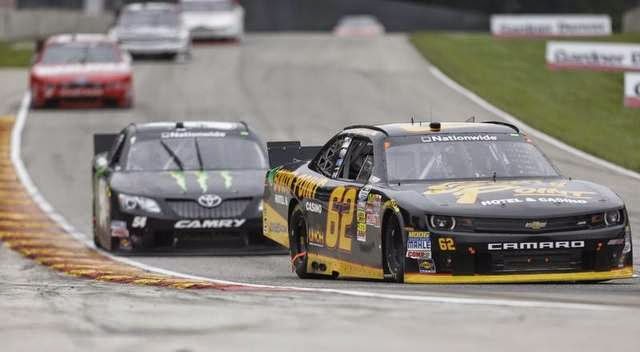 He immediately began knifing his way through the field, despite a malfunctioning windshield wiper assembly that severely impacted his vision.

"Even without the wiper blade problem, I said, ‘I’m coming to the front,’” he recalled. “That’s something I’ve been lacking lately; that killer attitude. But I’ve done a lot of racing in the rain, and while a lot of guys were struggling today, I was right in my element.”


Gaughan made a spellbinding charge through the field, passing cars at will while throwing huge rooster tails of spray out the back of his black-and-gold South Point Camaro. With a lap to go, however, he was still a distant second to Tagliani. The racing equivalent of drawing to an inside straight, he seemed destined for the latest in a maddening series of “close but no cigar” NASCAR moments.
Then, like a riverboat gambler in a white linen suit, Gaughan drew the one card he needed most. Justin Marks ran out of fuel, bringing out a caution flag that punched the field and put Gaughan a bumper away from the lead. Tagliani’s fuel cell then ran dry while awaiting the decisive green-white-checkered flag finish, handing the lead to Gaughan. 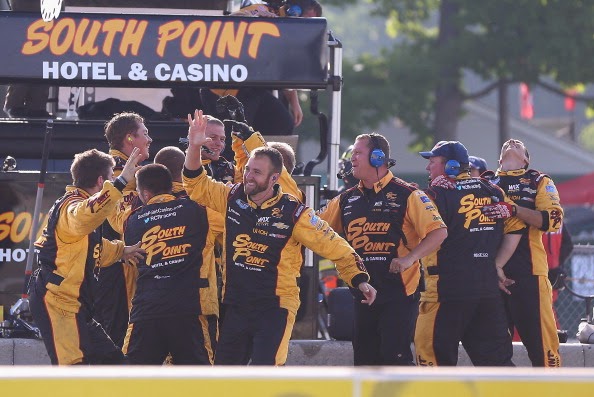 He kept the field at bay over the final two laps, pushing his deteriorating wet-weather tires to the limit with repeated banzai charges on the now-dry race track. Despite plumes of smoke billowing from his right-front tire, he led a resurgent Tagliani to the stripe by .820 seconds to claim his first-ever Nationwide Series win and his first NASCAR score of any kind since 2003.
“I can't thank these Richard Childress Racing guys enough,” said a teary eyed Gaughan in Victory Lane. “(Crew chief) Shane Wilson never quit on me, even when I got off course a couple of times and tried to screw up his strategy. They’ve been with me through thick and thin, and this win is for them.”
Saturday’s race had it all; speed, drama, twists of fate and a finish straight out of the Sci-Fi Channel. And in the end, Gaughan stood beaming in Victory Lane, soaking up the accolades for a win that was absolutely too long in coming.
“I don’t know how much more drama (people could ask for),” he said. “I don’t know what it looked like on TV, but from the driver’s seat, it looked pretty cool to me.”
Pretty cool, indeed.
Grandpa Jackie would have been proud.