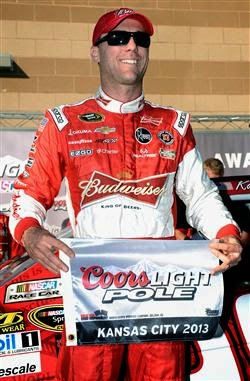 Kevin Harvick took the field to the woodshed Friday at Michigan International Speedway, demolishing the track record with a lap at 204.557 mph en route to the pole position for Sunday afternoon’s Quicken Loans 400.


“You just have to relax and really pay attention to not overdrive,” said Harvick of his fast lap. “It’s so easy to miss your line on the entry to the corner. My guys are doing a great job and we just have to keep doing everything we’ve been doing.”
Harvick called his pole run, “a credit to our Budweiser/Stewart-Haas race team for putting fast race cars on the track. Together with the Hendrick Motorsports engine package, it creates a lot of speed and it makes coming to these places a lot of fun. I’m really excited to start on the pole and get that first pit box, and hopefully we can put the whole day together on Sunday.
Harvick is statistically tough to beat when he starts from the pole. In eight career starts from the top spot, he has collected four wins. This is his third pole of the 2014 season.
Jeff Gordon will start outside the front row, after a 203.776 mph effort that he called, “up a heck of a lap, (but) just not enough to get Harvick.”
Pocono winner Dale Earnhardt Jr. will start third alongside Aric Almirola, with Paul Menard and Brad Keselowski in Tow Three. Defending series champion Jimmie Johnson, Kurt Busch, Joey Logano and Brian Vickers completed the Top-10. Ryan Truex was the only driver who failed to make the race, after fuel pump issues hindered his qualifying effort.
Posted by Dave Moody at 5:51 PM