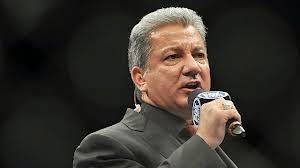 
The “Veteran Voice of the Octagon” will announce a different type of battle, introducing all 43 drivers, including the four championship drivers competing for the NASCAR Sprint Cup Series Championship. In addition, Buffer will introduce the race’s Grand Marshal prior to the command for the drivers to start their engines.
Tickets for Ford Championship Weekend are still available, but going quickly. Fans will have a chance to witness the crowning of three champions in NASCAR’s Sprint Cup, Nationwide and Camping World Truck Series.   Three-Day Championship ticket holders - fans with tickets for all three races of Ford Championship Weekend - will be able to be a part of history on three different nights, as Homestead-Miami Speedway crowns champions at the Ford EcoBoost 200, Ford EcoBoost 300 and Ford EcoBoost 400. Three-day ticket holders also will also have preferred parking, exclusive entrance through Gate 4 at the main entrance of the Speedway and access to the race track for the post-race Championship celebration.
The all-new Chase has consisted of unprecedented intensity, including green-white-checker finishes and heightened late-race drama and emotion as six of the eight Chase races have been won by Chase drivers, and the first two races of the Eliminator Round have been won by eliminated Chase drivers. Only four will be eligible to compete for the Championship at Homestead-Miami Speedway, and just six points currently separate the fourth-place Jeff Gordon (4,060) and the eighth-place Kevin Harvick (4,054).
For more information on tickets, call 305-230-5255.
Posted by Dave Moody at 10:08 AM