Busch Out Of Daytona 500, Chitwood Says Track "Did Not Live Up To Its Responsibility" 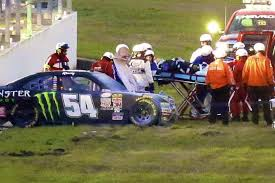 Kyle Busch will not compete in today’s 57th Daytona 500, after suffering a compound fracture of his right leg in a savage NASCAR XFINITY Series crash at Daytona International Speedway Saturday.


Busch impacted an unprotected section of concrete retaining wall near Turn One late in Saturday’s race, before being helped from his car and placed in an air for transport to Halifax Health Medical Center. He underwent surgery Saturday night to repair a compound fracture of his lower right leg and remains hospitalized today.


A somber DIS track president Joie Chitwood said the track “did not live up to its responsibility” by failing to install SAFER barriers on inside retaining walls, and pledged to begin installing them "on every inch of our property," beginning next week.


Impact-absorbing tire packs were installed along the wall late Saturday night as a stopgap measure, with Chitwood vowing, “This is not going to happen again… the fix starts right now." He said the speedway has installed "tens of thousands" of linear feet of SAFER barrier in five different stages over the years, including 2,400 feet prior to last July’s Coke Zero 400.


Busch, who was scheduled to start fourth in today’s Daytona 500, will be replaced by two-time NASCAR Camping World Truck Series champion Matt Crafton, who will make his first career Sprint Cup start in the No. 18 M&Ms Toyota.
Busch is expected to be sidelined for a number of weeks, though no permanent replacement has been named. His wife Samantha is expecting the couple's first child in May.
Posted by Dave Moody at 8:03 AM