This Week's Sign That The Apocalypse Is Upon Us

The "Sit With Jimmy" ticket package for February's 49th annual Daytona 500 is selling like hotcakes.

The promotion got its start in September, when Kenny "Have I Mentioned I'm The 2006 Busch Series Most Popular Driver" Wallace accused broadcast partner Jimmy "Mr. Excitement" Spencer of being out of touch with race fans. In a matter of hours, Spencer unveiled his "Sit With Jimmy" promotion, allowing fan to buy tickets and sit with him on the Daytona Superstretch during the 500. 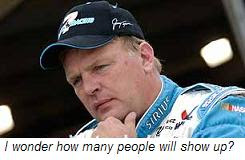 The original block of Lund Grandstand seats has already sold out, and officials at the Speedway have added more seats in the Allison Grandstand. Speedway President Robin Braig announced the move, saying, "Jimmy's setting himself and his fans up for a great Superstretch party."

A few weeks ago, I promised Spencer that if enough people showed up to sit in his section, I would wander down from my Turn Two broadcast position and smoke a cigar with them. It looks like I may have to follow through.

Two different "Sit With Jimmy" packages are still available; the $155 "Mr. Excitement" package, which includes superstretch "Sit With Jimmy" seats for both the Daytona 300 and Daytona 500, admission to DAYTONA USA (home of Sirius Speedway) and an exclusive "Sit With Jimmy" t-shirt.

The $99 "Jimmy Special" includes superstretch "Sit With Jimmy" seats for only the Daytona 500, DAYTONA USA admission and the t-shirt. You can join the fun by calling 1-800-PITSHOP, or by visiting www.sitwithjimmy.com.