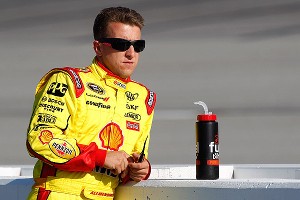 AJ Allmendinger has reportedly completed NASCAR’s Road to Recovery program, and now waits – somewhat patiently – for NASCAR to rule on his request for reinstatement.


Allmendinger was suspended by the sanctioning body on July 7 after failing a random substance abuse test for what was later revealed to be Adderall. He later admitted taking the drug after being offered an unspecified pill by a “friend of a friend” to combat fatigue.
Now, the former Penske Racing driver appears primed for a return. He surfaced at the IndyCar season finale at California’s Auto Club Speedway last weekend at the request of his former boss, Roger Penske.  While Allmendinger did not speak to reporters, Penske said his former driver completed NASCAR’s Road to Recovery three weeks ago.
“I wanted AJ to come out,” said Penske at the track. “I wanted him to get some visibility because he’s a good guy.” Penske also said there could be a spot for Allmendinger on his 2013 IndyCar roster, if sponsorship and other circumstances come together. The team has yet to resign Ryan Briscoe for next season, as teammate to 2012 title contender Will Power.
The California native had a highly successful career in open wheel racing, winning five races in 15 starts on the now-defunct CART circuit in 2006 before turning his attention to NASCAR.
Penske said Allmendinger “would certainly be someone we’ll think about” for a 2013 IndyCar seat, but stopped short of making a verbal commitment. He said Allmendinger is upbeat about his chances of returning to motorsports, and anxious to return to the cockpit of a race car as soon as possible.
There is no word on when NASCAR will act on his request for reinstatement, Allmendinger was unavailable for comment.
Posted by Dave Moody at 12:55 PM