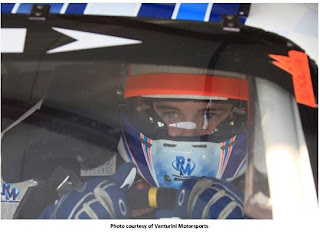 
Reed has raced as a developmental driver for Venturini Motorsports on the ARCA Series this season, and will make his first start on the 1.5-mile Las Vegas track.  The Bakersfield, Calif. native has posted one Top-5 and five Top-10 finishes in 13 ARCA starts, and  scored a career-best fifth place finish at Chicagoland Speedway.
The 19-year old Reed was diagnosed with Type 1 Diabetes in February of 2011, and was told by doctors that his racing days were over. He quickly shifted his focus, poured his energy into managing his health and educating himself on the disease. He has now returned to the sport, and uses his racing platform and personal story to inspire others living with T1D to continue living life to its fullest. He founded Ryan’s Mission (www.RyansMission.org) to help spread that message.
Reed’s efforts have made him a National Celebrity Advocate of JDRF, the world’s largest charitable funder of T1D research. Today, he is only one of three people in the world to compete at the highest professional levels of the sport with T1D.
“It’s pretty exciting to be making my first start in a NASCAR series,” said Reed. “Since I was a little kid, I’ve always thought about what it would be like to drive a Truck, Nationwide or Cup car. So to be finally doing it is really cool. I think it gives us a head start on next year, whatever we end up doing. Hopefully, it will be back in one of these three series.
“Everyone knows that Richie (Wauters) is one of the best in the business, so to be driving one of his trucks is an honor. We’ve been having success racing a Ford on the ARCA side, so the synergy is there. Richie’s truck being a Ford gives us a really big advantage.
Team owner Wauters returns to the Las Vegas Motor Speedway, the site of his first victory as a crew chief with driver Shane Hmiel in 2004.
“Las Vegas is a special track for me,” he said. “Any place where you have your first victory will always stand out, anytime you race there. We are really looking forward to having Ryan race with the team. He’s had success with Venturini’s ARCA team this year at the mile and a half tracks, so once we get him used to a race truck, I’m sure we’ll have a good result.
“Las Vegas is a fast track and I’ve had most of my successes on mile-and-a-half tracks, so I think that is going to be good,” Reed said. “I think it plays into my hands. I’ve spent some time in iRacing learning the track. It’s not like jumping in a truck and going around Vegas, but it will help me get some tips on where the line is and how big the track is. I’m just really excited to go out and see what we can do. I think it is a great combo.”
Racehard.com will serve as the joint sponsor for the event, along with RyansMission.org. RaceHard.com outfits serious racers, professional pit crews and diehard fans from head to toe with a huge selection of pit crew apparel, pit equipment and auto racing safety equipment.
Photo: Venturini Motorsports
Posted by Dave Moody at 5:50 PM