Johnson On Seventh Title: "It's Time To Go To Work" 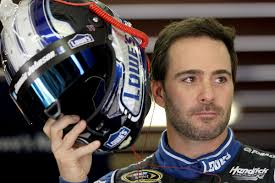 Jimmie Johnson knows what it takes to win the NASCAR Sprint Cup Series championship. With six trophies on his mantle already and a seventh within his grasp, the Lowe’s Chevrolet driver said today that a revised format for the 2014 Chase will challenge his team in ways they have never experienced before.


“If you have poor finishes in the first and second races and you’re not looking strong in points… you need the Hail Mary to make something happen,” said Johnson at Chicagoland Speedway. “If you get off to a quick start and you’re solid in the points, you’re going to take an opportunity to win, but you know you’re covering the base on points.
“There are going to be multiple strategies that take place, depending on performance. After three races, you’re going to have to re-rack and start over again. What makes it interesting is that there isn’t a clear strategy that can play out.
Over the 10 races, a lot can happen,” he added. “And this year, with the format changing as dramatically as it has… you just need to be hot toward the end. We’ll see how it all plays out.” 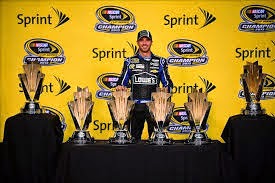 Johnson also said that his recent run of mediocre finishes is not an indicator of what is to come in the Chase.
“(Last year), we had a terrible run of races leading into the Chase and then we got off to a good start and won the championship. I’m reminding myself of that. I feel like there were a couple of Chases that we had momentum on our side and came in and got off to a great start and won championships. (The Chase) really is its own world. Just like any other sport when the playoffs start, everything starts over on a clean sheet of paper.”
After recording seven Top-5 and nine Top-10 finishes in last year’s Chase, Johnson said it may take a similarly strong performance to garner the 2014 championship.
“Every year, the competition gets more intense and (it is) more difficult to win. Really, that average finishing result just keeps getting to a smaller and smaller number. I’m planning for that, and hopefully we can light it up.”
If he is able to make it to NASCAR’s “Final Four” at Homestead Miami Speedway, Johnson said all strategic bets will be off, in favor of an all-out push for the checkered flag.
"It would change the mindset (and) the energy,” he admitted. “We've been fast down there. The year that Brad won, we were leading the race and in a position to win, then had a series of mistakes that took us out of contention. Last year, we ran up front in the majority of the race… trying to put pressure on Matt (Kenseth), and chasing him around in second spot.
“I definitely feel like we can go there and win. It's not Dover, but it's still a strong track for us, and we can go down there and get the job done if need be.
“I’m excited to get back in the car and get to work,” he said. “It’s been a much different week for all the Chasers, with the media circuits we’ve been on and two full days. I’m excited to get the racing mindset back to the forefront of my mind. We’ve all said plenty and probably have worn everybody out with our remarks and questions and answers, and now it’s time to get on the track and go to work.”