Stewart: Life After Ward's Death "Not Business As Usual" 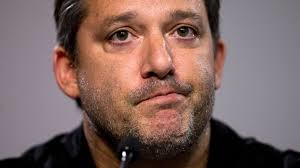 Tony Stewart spoke publically today for only the second time since the Aug. 9 incident at New York’s Canandaigua Motorsports Park that claimed the life of driver Kevin Ward, Jr.


A subdued Stewart spoke for more than 30 minutes and took questions from the media. And while declining to speak specifically on the circumstances surrounding Ward’s death, Stewart said his life has been changed by the incident.


"I don't know if it'll ever be normal again," he said. "Before the accident, a day would fly by. Now a day seems like two (or) three days; like the batteries are running low on the clock.”
Despite returning to NASCAR competition after a self-imposed, three-week hiatus, Stewart said life has “not been business as usual, by any means." He said he has remained secluded in his home for days at a time, often not leaving his bed. Asked what he would do differently, he replied, "I'd have stayed at Watkins Glen that night (of the accident). It wasn't a big-paying race. I just wanted to go run my Sprint Car for a night.


“I do it to have fun and it didn't end up being fun that night."


The three-time Sprint Cup Series champion backed away from his earlier comments to the Associated Press, saying there is a possibility he will compete in open wheel Sprint Cars again one day.
"I love what I do," he said. "I love driving race cars. I think it might change as far as how much of it and what I would do, (but) that would take a lot to stop."


Stewart said he is surprised that he continues to be criticized in some corners, despite a grand jury’s recent decision not to file charges against him in Ward’s death. In his words, "picking sides doesn't solve or fix anything. It's a waste of time.

“Initially, I was hurt by some of the things I read,” said Stewart. “But then I looked at who they were, and it's people that never met me, never spent time with me, don't know me. ...They were people that didn't like me to begin with and it didn't matter what the facts were.

“I really stopped wasting my time worrying about it. Like I said, I know what happened. I know what the facts are and that's all that matters.”

He also said he has given little thought to a toxicology report that found Ward to be under the influence of marijuana at the time of the incident saying, “That detail didn't mean anything to me. It was an accident. All along, I knew what had happened. I would be lying if I said there wasn't a piece of relief (in the decision not to indict), but that was very short-lived in my heart. It went right back to the fact that we lost Kevin. We lost a young driver that had a lot of talent."


Stewart said he was ready and willing to speak to the Ward family ''if and when they want to talk,” adding, “I don't need to talk to them for closure.”


He also said he is thankful for the encouragement he has received from sponsors, friends and fans of the sport, adding, "I think the support we have from fans… (has) been very comforting for us and for me. I've appreciated their support and how they welcomed me back.

“I thought I accidentally walked out in Dale Jr.'s spot," said Stewart of driver introductions at Atlanta Motor Speedway. "It was very overwhelming (and) I'm glad I had sunglasses on. It was probably the most flattering and humbling part of my career, to walk out there and have that kind of reception.

“Riding around in the back of the pick-up truck, seeing people against the fence that were cheering for us and they had Jeff Gordon shirts on and Carl Edwards shirts and Matt Kenseth shirts. It didn't matter what they had on, it really showed the support.”
Posted by Dave Moody at 2:08 PM