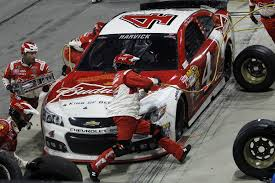 
Beginning with Sunday’s Sprint Cup race at Chicagoland Speedway in Joliet, Illinois, the No. 14 team’s tire changers, tire carriers and jackmen will switch to the No. 4 team, and vice versa.


The new pit crew lineup for the No. 4 Budweiser/Jimmy John’s team includes:


All of the above were members of the 2011 Sprint Cup Series championship-winning team with driver Tony Stewart. The new pit crew lineup for the No. 14 Bass Pro Shops/Mobil 1 team is as follows:


The No. 4 team and driver Kevin Harvick head into the opening race of the 10-race Chase for the NASCAR Sprint Cup seeded sixth among the 16 driver/team combinations competing in this year’s Chase. This is Harvick’s fifth consecutive Chase appearance and his eighth since the inception of the Chase in 2004. He finished fourth in his Chase debut in 2006, 10th in 2007, fourth in 2008, third in 2010, third in 2011, eighth in 2012 and third in 2013.