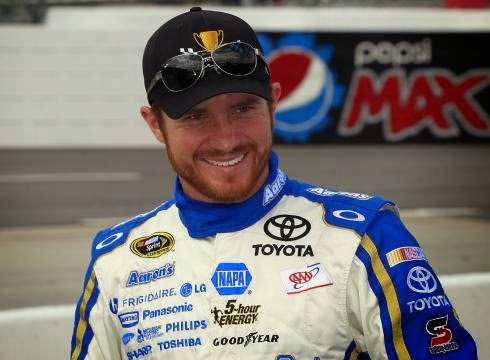 Vickers will make his season debut in the No. 55 Aaron’s Dream Machine Toyota for Michael Waltrip Racing at Las Vegas Motor Speedway on March 8.

MWR co-founder and two-time Daytona 500 champion Michael Waltrip will drive the No. 55 in the 57th annual Daytona 500 on Feb. 22. MWR will name a substitute driver for the March 1 race at Atlanta Motor Speedway later.

“The doctors gave me a clean bill of health and said I will be better than before,” said Vickers, the 31-year-old Thomasville, N.C. native whose health issues interrupted his racing seasons in 2010 and again in 2013.

“The advancements in modern medicine and surgical procedures are amazing and I have to thank my doctors at the Sanger Heart & Vascular Institute and Carolinas Medical Center for their extraordinary care. I have literally put my life in their hands twice and I cannot begin to express my level of gratitude.

“I was not feeling well in December, so I went to see Dr. William Downey in Charlotte. He discovered my body was rejecting a patch that was surgically placed over a hole in my heart a few years ago. He and Dr. R. Mark Stiegel immediately went to work on correcting the problem. I also want to thank the great counsel along the way by Dr. Jerry Petty, Dr. Robert Heyer and my hematologist Dr. Stephan Moll from the University of North Carolina School of Medicine who is the founder of www.clotconnect.org.

“Now all of my focus is getting ready so when I return we are prepared to win races and the championship in my Aaron’s Dream Machine.”

In 58 races driving MWR’s No. 55 Toyota, Vickers scored eight Top-5 and 19 Top-10 finishes. He won the July race at New Hampshire in 2013 and captured the pole at Talladega in October 2014. The 2003 Xfinity Series champion owns three victories and 12 poles in 316 Sprint Cup starts.

NASCAR confirmed today that despite missing the first two races of the season, Vickers will remain Chase-eligible.

“With the clearance from his physicians, Brian Vickers has satisfied all necessary NASCAR requirements to resume racing on March 5," said NASCAR Executive Vice President & Chief Racing Development Officer Steve O’Donnell. "Further, NASCAR has reviewed the circumstances surrounding his situation and has determined that he will maintain Chase for the NASCAR Sprint Cup eligibility despite neither entering nor attempting to qualify in the first two championship events, provided he meets all other necessary eligibility requirements.”
Posted by Dave Moody at 2:05 PM