Another Round Of Mayfield vs Mayfield 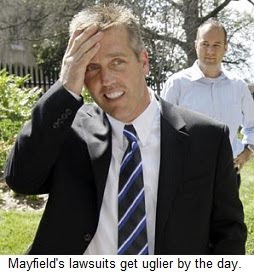 In documents filed last week as part of an ongoing slander lawsuit, Lisa Mayfield accused her former stepson of sharing methamphetamine with his father, Terry, and selling it to him on numerous occasions. She testified that her husband kept the drug in a film container in his bathroom -- snorting it through a hollowed-out ballpoint pen – and stopped using only after Jeremy Mayfield refused to continue supplying his with drugs after a falling-out. She said Terry Mayfield then turned to alcohol, drinking heavily in the months prior to his death.

She also claimed that Terry Mayfield was employed by his son in exchange for not telling NASCAR about the younger Mayfield’s drug use, and offered to go to rehab for alcohol in January of 2007 if Jeremy went to rehab for crystal meth. She claims that offer was refused.

Jeremy Mayfield denied those charges to SceneDaily.com’s Bob Pockrass yesterday, saying, “There is no truth or substance to what Lisa has said. It is easy to make these allegations against my father when he is not here to deny these things. Remember, this is the same woman who showed up at my house … after being told numerous times not to ever contact me or my family again, threatening to kill my wife.”

Mayfield has accused his former stepmother of complicity in his father’s death and of having an extramarital affair. Lisa Mayfield has admitted being involved with another man prior to Terry Mayfield’s death, but says the romance ended before Mayfield took his own life on September 5, 2007. She has repeatedly denied involvement in that death, and after re-examining evidence at Jeremy Mayfield’s request, authorities have reaffirmed their previous ruling that Terry Mayfield died of a single, self-inflicted gunshot wound to the chest.
Posted by Dave Moody at 10:57 AM