Time For NASCAR To Clean Up Its Annual Owner Points Mess

With a month still remaining before SpeedWeeks 2011 at Daytona International Speedway, the annual outbreak of owner points manipulation has begun. 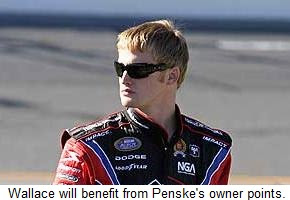 Sirius NASCAR Radio’s Sirius Speedway with Dave Moody has learned that Steven Wallace will contest the 2011 Daytona 500 in a Toyota fielded by Rusty Wallace Racing. Wallace will use owner points obtained from Penske’s Racing’s #77 Dodge, which finished 30th in owner points a year ago with driver Sam Hornish, Jr. Hornish told Sirius Speedway last week that the team does not currently have the sponsorship necessary to compete on the Sprint Cup Series in 2011.

Speaking on the condition of anonymity, sources close to the situation say a deal has been completed to transfer those points to RWR, making Wallace a guaranteed starter in the Daytona 500. Calls to both RWR and Penske Racing seeking comment were not immediately returned, but Roger Penske confirmed the plan in a Saturday email to FoxSports.com.

The RWR-Penske deal served as the opening salvo in what has become an annual frenzy of points shuffling that baffles even the most astute observers.

One year ago, team owner Doug Yates announced that he had merged his Yates Racing operation with the team then known as Gillett-Evernham Motorsports. Weeks later, Yates claimed the merger had never occurred at all, handing the 2009 owner points accrued by his operation to Front Row Motorsports for its #37 Ford. Yates "owned" the #37 in name only and played no role in the operation of the race team in 2010. Driver Travis Kvapil, however, received a guaranteed starting spot in each of the first five races of the 2010 campaign.

Latitude 43 Motorsports was also locked into the first five races of 2010, after purchasing Jack Roush's fifth Sprint Cup team just weeks prior to the start of the season. Latitude 43 owner Bill Jenkins had no prior history as a Sprint Cup Series owner, but his new team arrived at Daytona for Speedweeks 2010 knowing it would bank at least $250,000 for a last-place finish in "the Great American Race."

That's not the way it was supposed to work.

NASCAR's Top-35 system was designed to ensure that team owners would retain something of value when drivers departed during the offseason with sponsor in hand. Unfortunately, what once served as a reward for fulltime Sprint Cup supporters has now been manipulated to benefit teams that have never run a single lap in NASCAR's senior series.

The Top-30 owner points program has become a solution in search of a problem, and serves only to confuse fans, who rightly ask, "How did he qualify for the Daytona 500?"

It's time for NASCAR to clean up their mess, ruling that guaranteed starting spots in the first five races of each season will be awarded only to the teams that earned Top-35 Owner Points in the prior campaign.

No more rewards for those who have not earned them.
Posted by Dave Moody at 11:36 AM