Veteran Kevin Lepage will drive full-time for Team Rensi Racing on the 2011 NASCAR Nationwide Series. Lepage told Sirius NASCAR Radio’s Sirius Speedway with Dave Moody, “I’m real excited about it. I talked to several different teams, and Ed Rensi and (GM) Ronnie Russell were absolutely the best fit. They needed a driver in order to negotiate with sponsors, and I needed a team, so we put the deal together at the first of the week. I have a little bit of sponsorship from RaceDaySponsor.com, and we’re chasing more. We’ve got a lot of things working.” 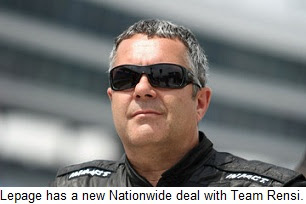 Lepage made 25 Nationwide Series starts last season for Mac Hill Motorsports; all of them of the “start and park” variety. The Shelburne, VT native said he is looking forward to completing races this season.

“I’m going to be racing all day for the first time since 2008, and I’m looking forward to it,” he said. “It was frustrating to start and park. It hurts to have to race the way we did. We qualified in the Top 20 -- or even the Top 10 -- most weeks, but we couldn’t afford to run the race. I’d qualify the car well, then get told, `We just sold your tires, so run a couple of laps and pull it in.’ We had fast cars, but we never got to show it.

“It ate me apart,” admitted Lepage. “When season was over, I told my wife I wasn’t going to do it again. If there was nothing left for me but `start and park,’ I was ready to pack it in and call it a career.”

The two-time Nationwide Series winner said he and his new team, “want to run hard and get the best finish we can at the end of the day. We’re not guaranteed starters for the first five races of the year, so our main goal is the get the car qualified every week and locked into Top 30.”
Posted by Dave Moody at 1:42 PM