Notes From The Daytona Notebook

NASCAR confirmed today that beginning this season, drivers will be required to declare in which of the three national series they want to earn championship points. 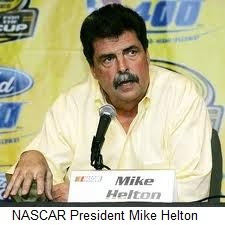 The move will prevent drivers like defending series champion Brad Keselowski and Carl Edwards from contending for the Nationwide Series title while still earning Sprint Cup points. NASCAR President Mike Helton said the move was made in an attempt to set both the Nationwide and Camping World Truck Series apart from Sprint Cup. He said both Keselowski and Edwards asked that the current system be maintained for an additional year, with NASCAR electing instead to make the change for the 2011 campaign.

Helton also said the sanctioning body has not made a decision concerning possible changes to the championship point systems for the 2011 Sprint Cup, Nationwide and Camping World Truck Series. He admitted, however, that the move is receiving serious consideration in an attempt to make those championships simpler for fans to understand. NASCAR Chairman and CEO Brian France is expected to announce the sanctioning body’s final decision next Wednesday.

The forecast for this afternoon is not encouraging, but cars did make it on-track for the first time at approximately 1:30 PM ET. There has been no official word on reports that NASCAR could push today’s test into the evening hours, under the lights. Testing is scheduled to end with an eight-hour session from 9 AM to 5 PM, weather permitting.

No Injection: NASCAR Vice President of Competition Robin Pemberton revealed that the switch to fuel injection will not take place this season, as planned. Unconfirmed reports had the changeover from carburetors to fuel injection coming in time for the June 5 Sprint Cup race at Kansas Speedway, but Pemberton said, "We've made some great strides in the last 60 days or so, (but) we don't anticipate any points races this year with fuel injection. (This) will be a year dedicated to fine-tuning and getting the process down, whether it be inspection, or the team side of it with building engines. That's going along quite well.'' 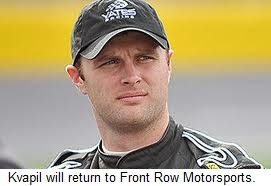 Front Row Announces Lineup: Travis Kvapil and David Gilliland will return to the Front Row Motorsports NASCAR Sprint Cup Series Fords this season. Kvapil will drive the #34 Long John Silver's Ford, with David Gilliland in the #38 Taco Bell Ford. A third car will complete in selected events with a driver to be announced.

Front Row will begin using FR9 engines from Roush-Yates Racing Engines this season and has upgraded its stable with 34 race cars purchased from Richard Petty Motorsports.

It is not known how today's announcement will impact Kvapil's rumored hiring to drive the #5 Camping World Truck Series Toyota for Randy Moss Motorsports. Highly placed sources say Kvapil is set to replace Mike Skinner at the wheel of RMM's #5 machine, but their are conflicts between the Sprint Cup and Truck Series schedules that would presumably prevent Kvapil from running full championship schedules in each series.
Posted by Dave Moody at 1:11 PM