Evernham To Hendrick In Non-Racing Role

Ray Evernham has formed a new relationship with former boss Rick Hendrick, but it won’t have anything to do with race cars. Ray Evernham Enterprises has entered an agreement to consult for the Hendrick Companies, overseeing a series of special projects that includes a Hendrick-branded line of high-performance parts and vehicles for street use. 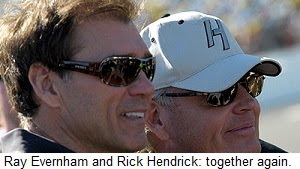 Evernham told Sirius NASCAR Radio’s Sirius Speedway with Dave Moody, "I've missed the relationships I had at Hendrick, and Rick and I talked for a long time about various opportunities that we see out there. Rick has always been good at thinking outside the box, and I’m really looking forward to working with him on these new projects.”

The three-time Sprint Cup championship winning crewchief made it clear, however, that his new role does not include NASCAR. “I feel like a retired athlete,” he explained. “I’ve been there and done that, and I am absolutely not interested in being assigned to a particular race team or driver. Those days are gone.” Evernham said his new relationship with Hendrick will not preclude him from working with other NASCAR teams, but stressed that he currently has no plans to do so.

Evernham has resigned from his analyst’s role at ESPN, calling his business relationship with Hendrick “a potential conflict of interest. I have had a great relationship with the folks at ESPN, and I don't want to put them, Rick or myself in an awkward position (Leaving ESPN) was one of the toughest parts about this decision, but it would have been pretty difficult to call Rick out on the performance of his NASCAR teams and still maintain our business relationship.”

"Ray has been a valuable member of our NASCAR team for the past three seasons, and we wish him all the best in his new role," said ESPN Vice President of Motorsports Rich Feinberg. "If he ever wants to come back, we'd be happy to talk to him."

Evernham will continue to field Sprint Cars for himself and his wife, Erin Crocker Evernham, in addition to owning and operating North Carolina’s East Lincoln Speedway. He has also played a pivotal role in the development of a new, dirt-track Legends car in conjunction with 600 Motorsports and Speedway Motorsports chairman Bruton Smith.

Hendrick said Tuesday that he is happy to Evernham back in the fold. "Hendrick Performance parts and cars will have a racing pedigree, and Ray is someone who will help ensure that on behalf of our customers and dealers,” said Hendrick. “He's assembled a terrific group of people at REE, and I see a lot of opportunities for them to be a valuable resource for our organization on projects like this. I know the kind of high standards Ray sets."
Posted by Dave Moody at 9:33 AM