Former Evernham Motorsports owner Ray Evernham told Sirius NASCAR Radio’s Sirius Speedway with Dave Moody Tuesday that he is troubled by the ability of NASCAR team owners to pull up stakes and leave the sport without paying their bills. 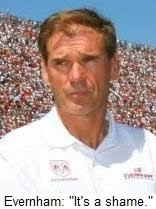 While never identifying former partner George Gillett by name, Evernham said, “When a company goes out of business or leaves without paying people, it’s not just drivers and crewchiefs (who are affected). There are tons of other people who get hurt. People are allowed to fly back to their lives on private jets, drink champagne and (go) skiing, while other people are left trying to figure out how to put food on the table. That kind of pisses me off."

While Evernham declined to comment on the late-2010 turmoil that surrounded the team now known as Richard Petty Motorsports, sources close to the situation say Gillett effectively walked away from the operation with more than a month remaining, leaving minority owner Richard Petty to keep the team afloat on his own. Petty was eventually able to assemble a new ownership group that includes Medallion Financial President Andrew Murstein and DGB Investments CEO Douglas Bergeron. Gillett now has no ownership stake in the team.

“All you can do is hope that what goes around comes around, and that the legal system -- or karma -- takes care of it at some point.”
Posted by Dave Moody at 1:34 PM