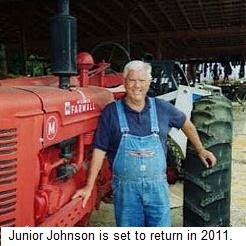 Barnwell told Sirius NASCAR Radio's Sirius Speedway with Dave Moody, “I’ve come to work with Junior Johnson Racing in Hamptonville, NC. Junior and Lisa are starting up a new race team for their son, Robert, and (Richard Childress Racing’s) Mike Dillon told them I would be a good guy to talk to about helping them with the operation. We’re going K&N Pro Series East racing with a 28-30 race schedule, with some UARA Late Model and NASCAR Whelen All-American Series events, as well.”

Barnwell said his new post is a dream come true. "Back in 1994, I started spotting for Junior when he was fielding cars for Sterling Marlin. We won the Southern 500 with Bill Elliott, and that was Junior’s last win as a NASCAR team owner. This may be the coolest thing I’ve ever done.”

The younger Johnson is a junior at North Carolina’s Forsythe County Day School, and is “a very impressive young man,” said Barnwell. “School comes first, then we’ll go race. We’re looking to progress him up through the ranks, with the eventual goal of taking him to Sprint Cup.”

The team has purchased two of Cole Whitt’s former Red Bull Racing K&N Series Toyotas for next season. “We still have to decide what manufacturer we’ll go with,” said Barnwell. “But when you’ve got Junior Johnson on your team, you have a lot of options come your way in terms of manufacturer affiliation and sponsorship; things like that.”

Barnwell will continue working as a spotter on the NASCAR Sprint Cup Series this season, working with Martin Truex, Jr.’s NAPA Toyota team. “I also want to thank Mark Smith and all the guys at Tri-Star Motorsports," he said. "We worked hard and made it to all the races last year, which was quite an achievement at times. I wish we could have run a little better, but my time with Tri-Star represents a very good chapter of my life.”