“I’m excited to be running back in the Nationwide and Truck Series again,” said Martin. “Everyone at Dollar General and Turner Motorsports has been great and I’m looking forward to hitting the track with them next year. Working with Turner [Motorsports], I get to extend my relationship with Chevrolet and continue to have Hendrick horsepower under the hood which is really, really good.” 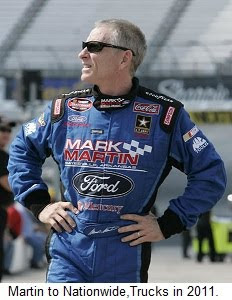 Martin brings unparalleled experience to Turner Motorsports. With a NASCAR career spanning 30 years, he has 40 wins in 794 Sprint Cup Series starts, holds the all-time Nationwide Series records for most wins (48) and most pole positions (30), and seven wins in 23 NCWTS starts. In 2006, motorsports media members acknowledged his accomplishments by naming him the greatest Nationwide Series driver of all-time. Martin continues to compete full-time in the NASCAR Sprint Cup Series in the No. 5 Hendrick Motorsports machine.

“The races we picked for both series are personal favorites of mine. I’d love to win another truck race, and I’ve got to get back to Victory Lane in the Dollar General car so I can keep Kyle [Busch] from breaking my Nationwide Series record,” laughed Martin.

Team owner Steve Turner said he is pleased to add Martin's experience to the team's lineup, and as high expectations for the organization in 2011.

“We are thrilled to announce the addition of Mark Martin to our stable of drivers,” commented Turner. “Mark shares my same passion for helping groom young talent and has expressed interest in helping us get our young drivers to the NASCAR Sprint Cup level. I can’t think of a better mentor than Mark Martin. Everyone at Turner Motorsports knows the value and experience he brings to our organization and we are all delighted to have him join our team. We look forward to getting Mark and Dollar General into the winners circle in 2011.”
Posted by Dave Moody at 12:35 PM