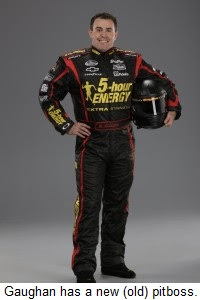 Berry and Gaughan have a long history together, with at least three different stints as driver and crewchief. Berry sat atop Gaughan’s pit box at South Point Racing beginning in 2006, and later replaced Tony “Rambo” Liberati in the crewchief’s role, accompanying Gaughan to Circle Bar Racing and then to the NASCAR Nationwide Series with Rusty Wallace Racing.

Gaughan commented on the move today, saying, “I’m extremely happy that the Hillmans chose to reunite me with Bryan Berry. This is definitely our best chance to win together. It should also help us get up to speed faster. We all know that sometimes my car descriptions sound a little odd. Bryan already understands what I’m saying, which should be a huge help.”
Posted by Dave Moody at 5:29 PM