Jason White To Team With Lottery Winner For NCWTS Chase 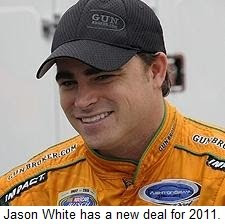 Sirius NASCAR Radio’s Sirius Speedway with Dave Moody has learned that Jason White will run a full championship schedule on the NASCAR Camping World Truck Series this season in Chevrolets fielded by the new Joe Denette Motorsports team, with sponsorship from Gunbroker.com.

Denette’s is a true Cinderella story. A lifelong race fan, the Spotsylvania County resident won $75.6 million in the Virginia Lottery's Mega Millions jackpot on May 1, 2009, just four months after being laid off from his job with a home building company. He opted for a lump-sum cash payout of $47.8 million, and immediately began investigating ways to become more closely involved with his favorite sport.

With the assistance of fellow Virginian Hermie Sadler, Denette began assembling a NASCAR Camping World Truck Series team. “Joe has always wanted to own a NASCAR team, and now he has the resources to do it,” said Sadler. “He came to me for help getting things organized, and we were able to forge a technical alliance with Kevin Harvick, Inc. to build the team’s trucks.”

After finishing 10th in Truck Series points a year ago, Jason White will bring his Gunbroker.com sponsorship to the team this season, running the full championship schedule. The possibility exists for a second truck in a limited number of events, with a driver to be named later. The team will field its trucks out of the Tri-Star Motorsports Nationwide Series shop in Mooresville, NC. White was unavailable for comment today, but the team is expected to announce its 2011 plans Tuesday.
Posted by Dave Moody at 2:22 PM