A vote is scheduled for January 18 that could determine the fate of the historic Nashville Fairgrounds Speedway. Nashville Mayor Karl Dean wants to bulldoze the track to make way for a public park and other development. Race fans began a petition drive to save the track last year, and have collected more than 40,000 signatures to date. The City Council will hold a public hearing on the 18th of this month, before voting on a bill calling for the track to be demolished.

The speedway has experienced decades of financial instability, and multiple promoters have struggled to turn a profit in recent seasons. The city received just $22,600 in rent from the track last season, and a previous promoter still owes $27,500 from the 2009 campaign. The track has also faced consistent noise complaints from neighbors. 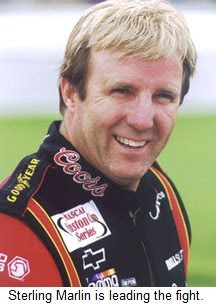 In an interview with the Tennessean newspaper, city finance director Rich Riebeling called revenue generated by the track “marginal. There have been three or four operators in the last decade, and none of them have been able to keep it going on a sustainable basis,” he said. “There's not a real market there for (racing)"

Others disagree. Former Daytona 500 champion Sterling Marlin has led the fight to save the historic raceway. Former Sprint Cup driver Chad Chaffin, who began his career at the fairgrounds oval and won two track championships there, called it "the mecca of amateur racing… the finest short track in the entire world.” He told the Tennessean, “Its glory could be restored if the city leaders would just realize what they have and invest in the track."
Posted by Dave Moody at 10:03 AM