Construction Begins On New Video Board

Construction crews using dump trucks and excavators have begun preparations for the debut of the world's largest HD video board at Charlotte Motor Speedway's 2011 May race events. 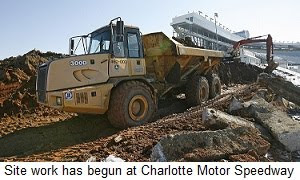 Crews from Granite Contracting of Concord, N.C. are using heavy earth-moving equipment this week for initial grading on the speedway's backstretch near Gate 25 where the gigantic, nearly 16,000-square-foot board will be located. Designed and created by Panasonic, the approximately 200-foot wide by 80-foot tall screen will be centered along the backstretch between Turns Two and Three, across from the start/finish line. Fans seated throughout the frontstretch will have clear viewing angles of instant replays, leaderboard updates and interactive entertainment displayed in 720P high-definition visuals. The screen will be illuminated by more than nine million LED lamps.

To prepare the base of the construction site, approximately 18,000 cubic yards of dirt and 3,000 cubic yards of concrete will be removed this month to bring the current grade down to the track wall level. The concrete will be removed during demolition of bleachers that were part of the speedway's original construction in 1960. Later this month, 12 holes will be drilled more than 50 feet into the earth to install the concrete piers that will support the 165,000-pound structure.
Posted by Dave Moody at 11:07 AM